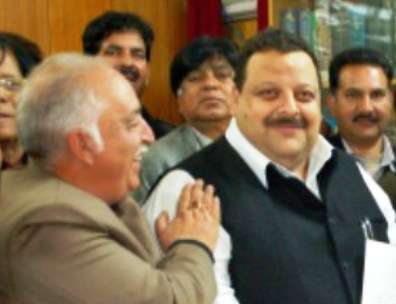 Jammu, August 03 (Scoop News)- Expressing concern over recurrence of earthquake in the Doda-Kishtwar region of Jammu region, Provincial President National Conference, Davendar Singh Rana , has made a fervent appeal to the Centre for expeditious sanction of the relief package for the tremor victims of the area, duly recommended by Chief Minister led Omar Abdullah government nearly two months ago.

“The area has been rattled by a series of tremors in the recent months and the two districts have suffered immense damages”, he said in a statement and called for release of relief for renovating damaged houses ahead of winter months.

Saying that the Chief Minister has been vociferously pursuing the issue with the Centre, more particularly the Prime Minister, Mr Rana expressed the hope for early release of funds as recommended by the State Cabinet/ He made a fervent appeal to all the political parties to rise above party lines and plead the genuine cause of the victims before the Centre.

The Provincial President also referred to the tremor jolts felt in twin districts yesterday and this morning and called for initiating necessary measures, in consultation with the experts, for taking preventive measures to save public life and property in the event of natural calamity.

Mr Rana urged the district administration to take all necessary steps for instilling a sense of confidence among the tremor-scared population. He also called for putting in place the disaster management mechanism to meet any eventuality. He also stressed the need for quelling the rumours which are unfortunately being floated by mischief mongers to create panic among the masses.

He said the state government has already taken several initiatives to provide assistance to the people within available resources. “In view the damages caused, and keeping in mind the financial constraints of the State Government, the Union Government must immediately announce a Leh pattern aid to the affected people”, he said adding that the central assistance has assumed added significance in view of recurrence of tremors.MORE AT http://scoopnews.in/det.aspx?q=30988