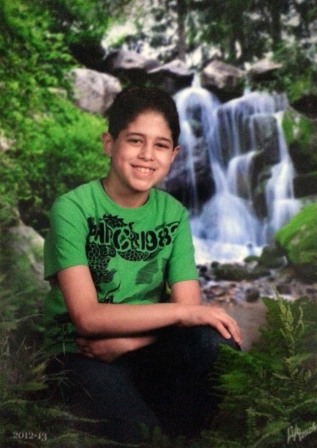 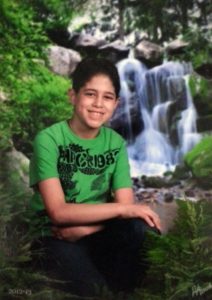 Every baby cries. But Akram and Joumana Khalil of Dearborn, knew something was not quite right when their baby boy Hussein had screaming episodes that would not go away. At just three weeks of age, the Khalil family decided to seek treatment with experts at the Children’s Hospital of Michigan, where doctors diagnosed him with severe Factor VII deficiency, a rare bleeding disorder that can cause bleeding in the brain. The disorder can be life threatening and can lead to seizures and brain damage. Hussein had experienced a brain hemorrhage that caused severe damage to the right side of his brain and left him very weak on his left side. In addition he started having seizures that were triggered by the slightest noise.

Doctors on staff at the Children’s Hospital of Michigan performed an initial surgery to stop the bleeding Hussein was experiencing in the brain. The surgery stopped the hemorrhage but Hussein also experienced seizures triggered by the simplest sounds. The seizures were frequent and debilitating according to his uncle, Ali Khalil. “Practically any noise he endured would cause a seizure. Even things like snapping your finger or shaking keys could trigger a seizure. The seizures were continuous and he would black out and sometimes bruise his face,” says Ali.

Medications to control the seizures were not working, so a team of specialists on staff at Children’s Hospital of Michigan, including Harry Chugani, MD, chief of Neurology, Sandeep Sood, MD, neurosurgeon and Madhvi Rajpurkar, MD, division chief, Hematology, determined the best course of treatment to manage Hussein’s seizures would be additional brain surgery. “To stop the seizures we considered two options. One was to remove the entire damaged side of the brain. This operation, called hemispherectomy, is routinely done in patients who have seizures from brain hemorrhage in infancy. But Hussein’s underlying bleeding tendency would present a very high risk for this procedure. Instead it was proposed to disconnect the damaged side of the brain from the normal side so that the seizures would be unable to spread. Even this operation presents a high risk of bleeding during or after the operation in Hussein’s case,” said Dr. Sood. He added that correction of the factor deficiency before, during and after the operation was a very important part of managing his condition.

Dr. Rajpurkar who managed his bleeding disorder said the procedure is considered rare for the type of disease Hussein has. “We could not find any record in the literature on anyone in the country performing this type of surgery on a patient with his bleeding disorder,” she said.

Fortunately the second brain surgery was very successful. The surgery was performed in 2012 and Hussein has been seizure free since. “The procedure has dramatically helped Hussein. He does have partial mobility in his left arm and leg which he has had since the initial bleed in his head at three weeks of age, and has a reduced side view where he might turn to you to see fully. But emotionally and physically he has markedly improved,” says Ali.

Prior to the procedure, Ali says his nephew needed help to walk down the stairs or go to the bathroom. He also needed to wear a helmet or bodysuit to play outside to avoid any type of injury from a fall during a seizure. He now likes to play video games and basketball and has the courage to go up the stairs by himself. “He is much more independent and we are very thankful at how much the procedure has helped Hussein,” says Ali.
For further information on bleeding disorders and seizures or to schedule an appointment call (313) 745-KIDS or toll-free at (888) 362-2500. You can also visit www.childrensdmc.org/cancercenter or www.childrensdmc.org/pediatric-neurology.