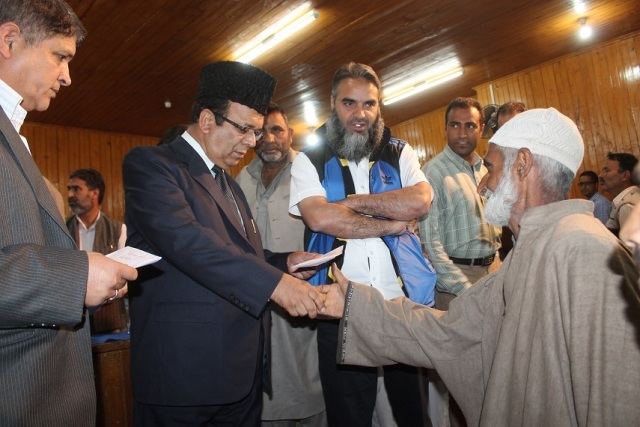 Budgam, October 11, (Scoop News)- Asking administration to be pro active to solve the problems of the people with social obligations, the Minister for Finance and Ladakh Affairs Ab Rahim Rather today said that provision of all the basic amenities to the people at their door steps is the motto of present Government led by Chief Minister Omer Abdullah . He said the recent floods, which have shattered the economy of the state, has posed a big challenge before the administration and the stake holders to deal with the situation with a joint effort adding that “we have to go together to rebuild and rehabilitate the damaged infrastructure and economy with courage and full determination.”
Speaking to public gathering, after distributing relief cheques under IAY out of CDF to the beneficiaries at Sheikh-ul-Alam Hall Budgam today, Mr Rather said that the government in addition to approving special financial package of Rs 44000 Cr for rehabilitation of the flood affected people of the state, has under the provision of VAT ACT extended several concessions to the traders belonging to flood hit areas of both Jammu and Kashmir divisions, to enable them restart their business activities. He said the proposed package will be submitted to Govt of India shortly for accord of sanction. “Facilities under VAT and Entry Taxes shall be available to all flood affected dealers regardless of geographical location of their business premises in any part of the state,” Mr Rather added. He said the state Govt. has also sought 10 years tax holiday for J&K to help it revive it’s economy. He asked the beneficiaries to make better use of the financial assistance provide to them under IAY.
The District Development Commissioner, Budgam Manzoor Ahmad Lone was also present on the occasion.
Mr Rather said that the every region of the state especially backward and remote areas have witnessed an unparalleled development and growth during the last 6 years of the present dispensation. He said owing to the pivotal role of road linkage in socio economic emancipation , the present Govt has accorded top priority to road connectivity in remote areas, adding that the Chari-sharrief constituency is, perhaps the first hilly constituency of the state, to have 100% road connectivity. He said no stone will be left unturned to come up to the expectations of the people.
Listing some landmark achievements the present Govt, Mr Rather asserted that could not be done in many years ,after independence, was achieved in just 6 years of the present Govt headed by Chief Minister Omer Abdullah. He challenged his political opponents to show a single habitation , out of 115 villages of the Chari –Sharrief constituency where benefits of the development have not reached.
Describing peace and unity as key to sustainable development and socio economic transformation, Mr Rather asked the people to defeat political parties, who thrive on deceit and lie and want to polarize the society for achieving their petty gains .He cautioned the people against the booby trap of the opposition to hoodwink public opinion and asked them not to get swayed away by their false and mischievous propaganda.
SOURCE http://scoopnews.in/det.aspx?q=41510