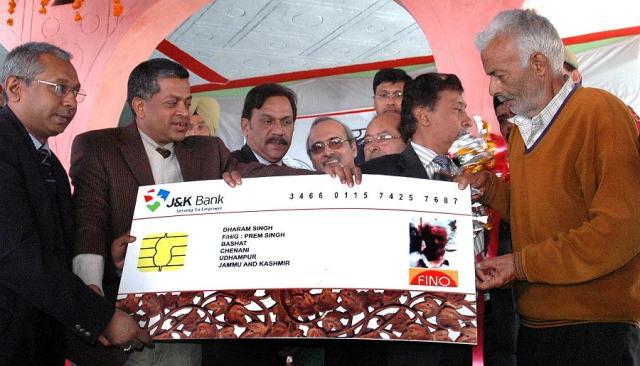 Udhampur/Jammu, November 27 (Scoop News) – Executive Director, Reserve Bank of . Deepak Mohanty today said that RBI’s outreach programmes which started during its Plantinum Jubilee year was being continued with a view to deepening the penetration of financial inclusion and expanding the coverage of financial services to all sections and all regions of the country in a meaningful way, particularly to those at the bottom of the economic pyramid, and thus achieving the objective of inclusive growth.

Deepak Mohanty further said that Bashat village was one of the 3 model villages chosen by RBI for outreach activities in the State for 100% Financial Inclusion during 2010-2011 by using Information and Communication Technology (ICT) for issuance of smart cards through the Business Correspondent (BC) model. The main aim was to achieve the objective of financial inclusion and providing doorstep banking services to the rural poor, small and marginal farmers, people of small means, women, etc. He also apprised the gathering that the biometric smart cards have inbuilt security features and are therefore very safe for conducting transactions. The card holders would also get receipt for each transaction.

Earlier while welcoming the Chief Guest and other dignitaries to the programme, Regional Director for . Arnab Roy stated that during the last 75 years, Reserve Bank of has played an important role in strengthening the economy of the country. He mentioned that during the Platinum Jubilee year (2009-10) of RBI it was decided to reach out to the remotest villages of the country for extending banking services thereto so that the common  man is linked to the banks without actually visiting a bank branch through Information and Communication Technology (ICT) initiatives and intervention, using the Business Correspondent (BC) model.

On the occasion. Mohanty and other dignitaries also distributed smart cards issued by J&K Bank Ltd and witnessed the activation/transactions through smart cards not only for the common villagers but also for NREGA beneficiaries. . Mohanty interacted with the common villagers while distributing smart cards and clarified their doubts. This was a new and unique experience for the villagers who showed great enthusiasm to get connected to the banks without visiting a ‘brick and mortar’ branch. He also emphasized the role of Financial Literacy and Credit Counselling Centres and advised the banks to open such centres for the benefit of people.

A cultural programme was presented by the school children before the dignitaries.

The audience was familiarized with the history and functions of Reserve Bank of through a film show. Films on features of genuine notes and on the functioning of the Banking Ombudsman were also shown for the benefit of the public. With the help of J&K  Bank Ltd, a counter for exchange of soiled and mutilated notes and issuance of fresh notes and coins was set up at the venue which attracted a huge crowd. Literature highlighting the functions of RBI and on financial literacy and education was distributed to the students and other members of the audience.