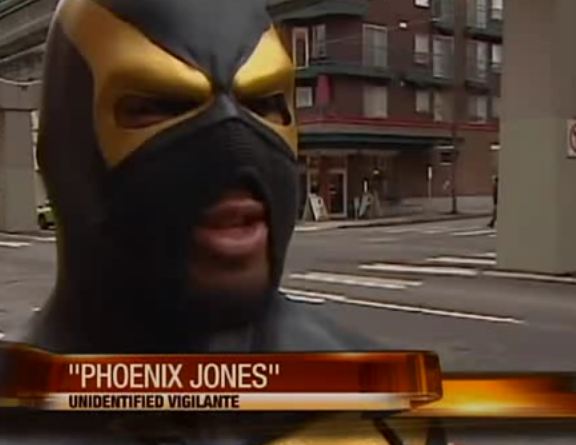 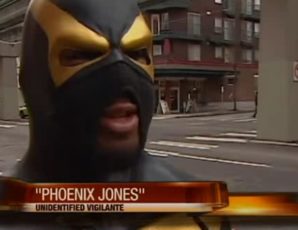 “what are they going for a gun?” I asked getting ready to hit the dirt. “THis is Phoenix Jones – the Guardian of Seattle. We need police now!”

“Phoenix Jones” (aka: Benjamin Fodor) is a real life superhero who made a name for himself a few years ago battling low level drug pushers and confiscating crack pipes in Seattle, Washington to the great annoyance of the local police.

To some he was just a man with serious mental illness, but to others he was something much more – he was a bona fide American hero who actually tried to save lives, even if it meant risking his own, which he did on numerous occasions by the way.

Now new details have emerged in a book “Heroes in the Night”, by Ted Krulos, a  freelance journalist who gives us the rare privilege of spending a day in the life of Phoenix Jones:

“Phoenix yelled that they needed to stay away, and when they charged him he doused a few of the men with a steady stream of pepper spray.” pg 215

“What are they doing going for a gun?” I asked getting ready to hit the dirt. “This is Phoenix Jones – the Guardian of Seattle. We need the police now!”

“Phoenix and I made it to a concrete median, then noticed the Russians revving up their Escalade to try and run us down. “Take cover! Protect yourselves!” Phoenix shouted.” pg 215

See video: Phoenix Jones gets a heroin dealer off the street http://www.youtube.com/watch?v=1lt_0erYer