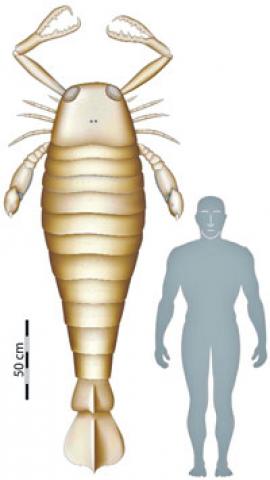 Paris: This was a bug you couldn’t swat and definitely couldn’t step on. British and German researchers reported Wednesday that they had discovered the giant fossilised claw of an ancient sea scorpion that, hundreds of millions of years ago, would have been over 8 feet long – much taller than the average man, and almost as long as a car.

The find, in a quarry near the German town of Pruem, is the biggest specimen of arthropod ever found, they said in a study published by Biology Letters, a journal of Britain’s Royal Society.

“This is an amazing discovery,” said Simon Braddy, from the University of Bristol in England.

“We have known for some time that the fossil record yields monster millipedes, super-sized scorpions, colossal cockroaches and jumbo dragonflies, but we never realised until now just how big some of these ancient creepy-crawlies were”

The 18.4-inch claw was wielded by a species of sea scorpion called the Jaekelopterus rhenaniae, which lived between 460 and 255 million years ago.

Using the claw as a benchmark, the scientists believe its owner was between 7.57 and 8.41 feet long.

Chelicerae – wand-like appendages used to grasp food and bring it to the beast’s mandibles – would have added another 1.6 feet.

“This exceeds the previously-recorded maximum body length of any arthropod by almost half a metre, the chelicerae not included,” their study says.

Despite their name, sea scorpions, known as eurypterids, were not true scorpions. Equipped with long, flat, jointed carapaces, they stalked warm shallow sea waters from around 500 million to 250 million years ago, eventually moving into fresh water.

Biologists delving into Earth’s distant past are divided as to how some arthropods were able to develop into such monstrous size.

Some suggest that they benefit from an oxygen-rich atmosphere, while others argue that they had to get bigger in order to keep up with the super-sizing of their likely prey, the early armoured fish.

“There is no simple single explanation,” said Braddy. “It is likely that some ancient arthropods were big because there was little competition from the vertebrates, as we see today. If the amount of oxygen in the atmosphere increased suddenly, it doesn’t mean all the bugs would get bigger.”