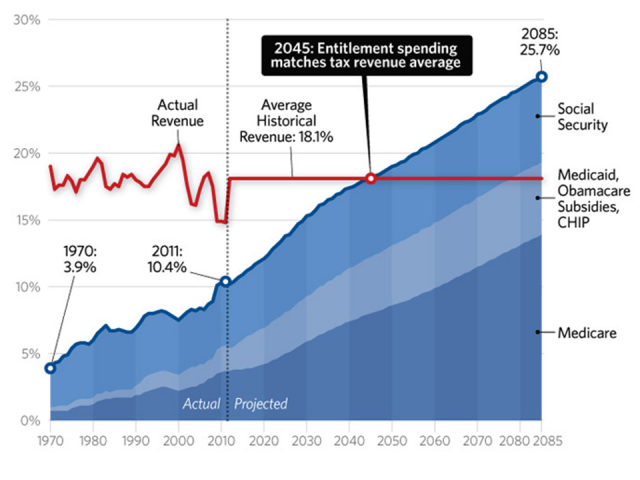 Now that sequestration appears to be inevitable, the pundits have entered the acceptance phase of grief.  After all, sequestration only affects discretionary spending and then only $85 billion per year.  Entitlements in the form of Social Security and Medicare will total $1,626 billion during the same period:  Social Security – $820 billion, Medicare – $523 billion and Medicaid – $283 billion.  .

With sequestration out of the way, perhaps the political class can focus on entitlements.  There are proposals to cut benefits through changing in the CPI escalator or to make the rich pay higher Medicare premiums – all good ideas – but not the idea that could focus the public’s mind on the real problem:  the elderly are receiving more in entitlements than they paid into the system.  This imbalance between what is coming out and what went in is the crux of the issue.  Entitlements are a zero sum game – there are no win-win outcomes – someone has to pay for benefits (even if it is the bond market) and someone gets the benefits.

The elderly will say that they paid into Social Security and Medicare throughout their careers and therefore they are entitled to the entitlement benefits.   But a closer look at the numbers shows that that statement is not true.  The elderly are getting more from Social Security and Medicare – even adjusted for interest – than they paid it.  They are getting the proverbial ‘free lunch’.

Having two 80-year old parents myself, I actually like the current system of rich entitlements while they are alive.  Medicare and Social Security give my parents a great sense of security.  They believe in government having grown up in the New Deal and believe that the system should take care of them and treat them with dignity.  My father loves to boast that Medicare paid for his entire quadruple bypass heart surgery; he only had to pay $35 for the bedside phone.

Both of my parents – who are divorced – have substantial assets that they accumulated over a lifetime.  With the current entitlement system, these assets are wonderfully protected.  Instead of spending down these assets in line with their life expectancy on medical costs and retirement income,  which is what a rationale person would  do – and which would make my old, fearful parents feel very insecure – they hold on to these assets like a security blanket or ‘comfort object’.  When the stock market crashed in 2008 / 2009, my mother totally freaked out even though she had no intention of actually ever spending the money.

So protecting these assets during their lifetime is very important to me.  It makes them feel secure and creates the illusion of permanency which is psychologically important to aging human beings.    Old folks don’t want to watch their net worth decline in line with the slipping sands of time.

This will lower the tax burden on the living.

This fair and sensible approach to entitlements has been communicated to all the politicians who represent me at the Federal level:  Charles Schumer (one of the ten most powerful men in America), Kristen Gillibrand and Nita Lowey.  In every case, I got back a form email saying entitlements were important to protect and preserve.    None of them even read the letter so they couldn’t agree with me that recovering excess entitlements through a Federal Death Tax made sense.

Filed under: Politics, US
Share Tweet Pin G Plus Email
previous article: Selling vegetables on streets
next article: Pollution are agents causing pollution of any type