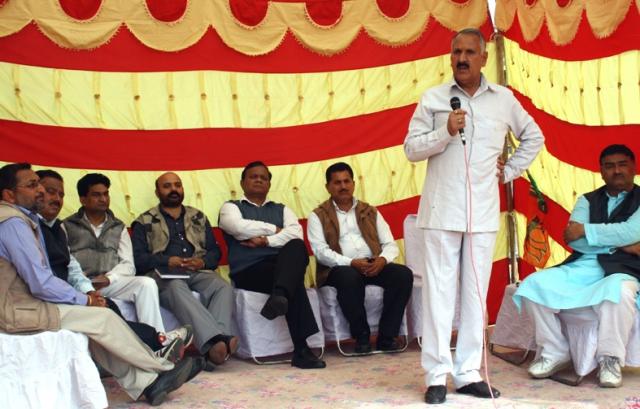 , March 20 (Scoop News) –   president Shamsher Singh Manghas  today reminded the NC-Congress coalition in the state as well as Congress-led UPA at the centre that refugees too are human beings and hence deserve honour, dignity and all the rights which are being enjoyed by citizens in other part of the country.

Addressing a massive public gathering under party’s “Jan Sammelans’ being organised in ward No. 60 of Paloura area, Manhas said it is indeed unfortunate that  today even after 65 years of independence,  lakhs of refugees from West Pakistan have not been granted citizenship rights. These helpless people are leading miserable lives. For decades, they are consistently agitating, holding protests, sitting on hunger strikes, courting arrests in different parts of the state. These people have been also observing hunger strikes even in , but neithr state government nor government at the centre have ever shown any concern towards their genuine demands.

He said that the only reason for not granting full citizenship rights to refugees from west Pakistan is that almost all of them belong to a particular faith and they preferred to settle in instead of going to other parts of . He said that it is not only refugees from West but those from PoK too are seen coming on roads for grant of compensation. Those displaced in 1965 and 1971 are also having grievances. In other words, it will not be wrong to say that our preovince has became the land of refugees and it is so because of the indifferent attitude of the government.

Manhas said that BJP has been supporting the demands of refugees and declared that the party will always raise their issue at al the apropriate platefom in future too.

BJP State Vice-President Bali Bhagat said that the party has been reaching the people by organising such “Jan Sammelans” in order to educate them about the anti-people policies of the state government and mobilise their support in favour of the BJP so that we win maximum seats in the forthcoming local bodies elections.