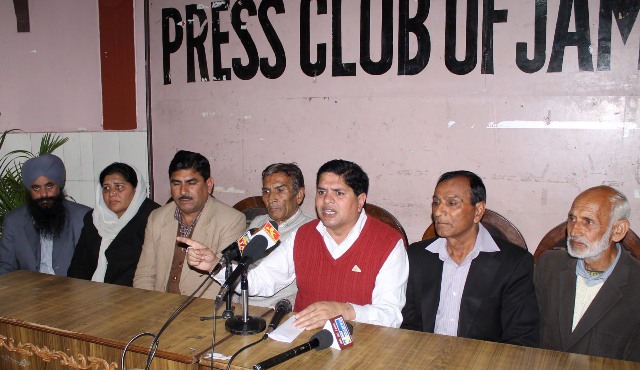 Jammu, March 10, (Scoop News)- In a significant development ahead of forth coming Lok Sabha Elections, different organizations working for the cause of Displaced Persons (DPs) from PoK, Chammb 1965, 1971 (Camp & Non-camp) and West Pakistani Refugees, have joined hands under the banner Refugees United Front.
This was announced by Rajiv Chuni, Chairman of S. O. S. International – An Organisation for Displaced Persons of PoK and President of the newly floated front, during a Press Conference today at Jammu Press Club. He was flanked by the Front chairman Capt. Yudhvir Singh, General Secretary Labha Ram Gandhi, Sr. Vice President Khajoor Singh, Chief Spokesman S R Nagyal, all vice-presidents S/Sh. Lalit Kumar, Harjit Singh Panch, Master Yog Raj Raina, S. Hari Singh, R. C. Sharma (Raju), Iqbal Singh, Skandhya Sharma, Kashmir Singh, Sub. Kasita Singh, Puran Choudhry, Master Ram Rattan, Capt Jagdev Chib, Chajju Singh Manhas and Paramjit Singh, all secretaries S/Sh. Mohinder Singh, Capt Bishamber Nath, Rassal Singh, Vijay Sharma, Talwinder Singh, Jaipal Sharma, K. L. Bakshi, Kulbir Singh Chib, Bimla Devi, Jagdish Kumar, Madan Lal, Sukhdev Singh Manhas, Capt Rattan Lal, Thoru Ram, Capt. Bua Ditta Chib, Sub. Jagdev Singh, Insp. R P Singh, Pawan Singh Salathia, Sat Paul Lakha, Rashpal and Ashok Kumar, Treasure Prashant Sharma.
Talking to media persons, Chuni Informed that the front has been floated with an objective to keep all the refugees together during this crucial time of parliament elections and teach all the political parties a lesson for their attempts of befooling the community time and again.
He alleged that no political party was concerned about the sad plights of refugees, who have been suffering for the last several decades due to insensitive and step motherly treatment meted out to them by the successive Governments in Centre as well as State.
“Except providing lip service to the refugees, these political parties never seriously considered grievances and demands of refugees who were always being treated as mere vote bank during elections and dumped there after”, he said and particularly lashed out at BJP and Congress for exploiting Nationalist sentiments of displaced community, which had saved Jammu and Kashmir from getting into the hands of Pakistani raiders by sacrificing their own lives during Oct.-Nov. 1947.
These parties talk of Kashmiri Migrants who have so far been extended relief of more than Rs. 30,000 crores but not the rehabilitation of refugees who are still living a miserable life in the ghettos without any sort of relief from any quarters, Chuni alleged and said that the community was not convinced over State Government and Cong leaders’ claims of preparing a rehabilitation package for the refugees.
Chuni said that since the take-over of coalition government headed by Omar Abdullah in early 2009 there was enough time of more than 5 years with the government to mitigate the sufferings of DPs of PoK & Chammb and West Pakistani Refugees who are living under sub-human conditions, but unfortunately they did nothing in all these years for these destitute persons and now on the eve of Parliamentary elections shedding crocodile tears to cheat them actually eyeing on their solid vote bank.
He further said that this time around Displaced Persons from PoK & Chammb and West Pakistani Refugees shall adopt the policy of “No Work – No Vote” for those candidates and political parties who did nothing for them.
“This is enough now and the refugees will no longer continue to trust these parties, which has ditched us repeatedly. The Refugees United Front is a step forward in this regard ahead of election as the community has considered influence in at least 25 Assembly seats in J&K,” he said and exhorted the refugee community to remain united and teach a lesson to all political parties in the forthcoming polls.
Chuni informed that the future strategy of the Refugees United Front was being chalked out in consultation with the entire displaced community and the same would be revealed to media in next few days.
The different organizations those joined hands today includes S. O. S. International – An Organisation for Displaced Persons of PoK headed by Rajiv Chuni, West Pakistani Refugee Action Committee headed by Labha Ram Gandhi, POJK DPs Front 1947, 65, 71 & non-camp headed by Capt. Yudhvir Singh, Chammb DPs Association headed by S. R. Nagyal, Non-Camp Refugee Society Chammb Area (Regd.) headed by Khajoor Singh and JK Youth Sharnarthi Action Committee headed by R. C. Sharma (Raju).