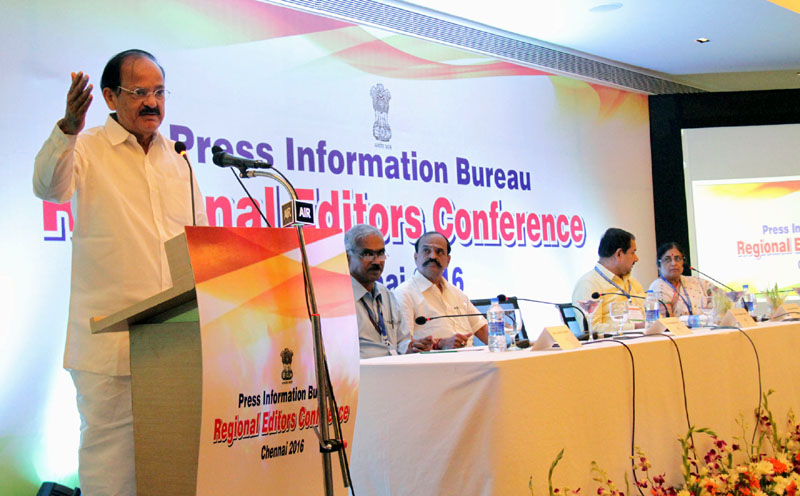 Chennai (PIB-GR-TYP-BIN): Union Minister of Information & Broadcasting Mr. M. Venkaiah Naidu has stressed the need for self-regulation and reasonable restrictions in the context of rapid expansion of different forms of media in the country and the attendant competition in reporting on various events to maintain public order and ensure integrity and sovereignty of the country. He spoke at length on various aspects of functioning of the media after inaugurating a two day ‘Regional Editors Conference’ at Chennai on Sep 1.

Mr. Venkaiah Naidu said that there is a need to ensure balance between freedom of expression and the genuine need for reasonable restrictions to ensure that that there is no ‘divisive communication’ given the social, cultural and economic diversity in the country. Self-regulation by media could be useful in this regard, he said. The growing compulsion of ‘instant communication’ should not lead media away from truthful reporting, the Minister stressed.

The Minister urged the media to effectively play out its role as a partner in the progress of the nation by empowering the citizens with required information that would give them a voice. Mr. Naidu noted that success of developmental programmes of central and state governments depend on mass mobilization of people in which the media has an important role to play. “Hence, the Government led by Prime Minister Narendra Modi has placed communication as a critical component in the Governance of the Nation” said Mr. Naidu.

Noting that media in the country has been by and large progressive, Mr. Naidu reminded the media of its first responsibility being towards the nation and the society. He noted that despite the emergence of new forms of media, print media has been reporting steady growth which is being driven by the growth of regional media. Mr. Naidu noted that regional media is uniquely placed in connecting the governments and the people given their focus on regional and local issues and their proximity to the people.

Mr. Venkaiah Naidu expressed concern over politicization of public discourse on issues that have a bearing on social cohesion and national unity and integrity. He said that “Human rights are meant for human being and not for terrorists. One should not identify those imprisoned by their caste or religion. Illegal detention is not correct. One can seek fast track adjudication but not on the basis of caste or religion. Media should guard itself while reporting on such demands and events”.

Tamil Nadu Minister of Information & Publicity Mr. Kadambur Raju, speaking on the occasion referred to the developmental initiatives of the State Government, the efforts being made to create an enabling environment for effective functioning of the media and the positive role being played by the media.

The two day Regional Editors conference organized by the Press Information Bureau is aimed at sharing with the senior journalists of the southern States and Union Territories, the perspectives of and performance under new initiatives of the Government of India in sectors pertaining to Urban Development, Information Technology, Coastal security, Commerce and Industry and Shipping and Highways Development. About 100 media persons are attending the conference.