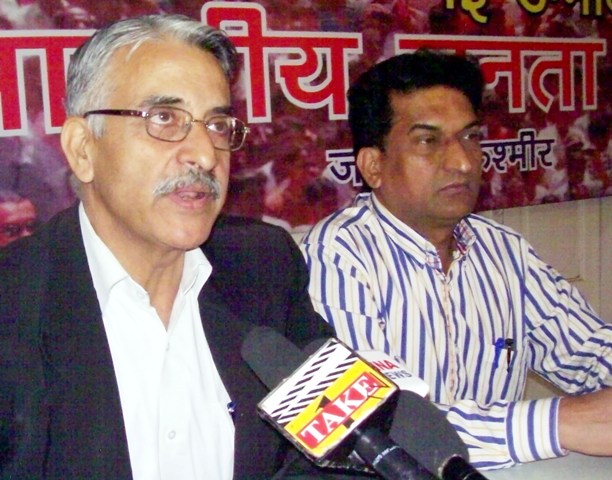 Jammu, October 22, (Scoop News)- While terming the rehabilitation package of flood victims recently recommended to the Govt. of India for funding as a slip-shod exercise done by the state government and which needs further fine tuning and more comprehensive study, BJP State Spokesperson Lalit Moza (Adv.) while addressing a press conference at party headquarters on Wednesday, said that nevertheless after a total paralysis in the initial days of the floods, the state government has done something and which is a matter of satisfaction. There is no doubt that no amount of financial assistance can undo the damage and trauma suffered by the victims of the floods but the government assistance would to some extent soften the devastating blow suffered.
Adverting to the suffering and the plight of the Kashmiri migrant traders and the victims whose dwellings were put to arson in the valley by the miscreants, Moza demanded that they be also treated at par with the sufferers of the recent floods. The floods were a natural phenomenon and perhaps outcome of global climate change but the Kashmir migrants’ loss of trade and trade assets as also the dwelling houses that were torched in 1989 and onwards, were manmade and reflected the utter failure of the government in enforcing rule of law and safety of life and property of its citizens. It is high time that the government rehabilitates as it proposes in respect of flood devasted traders, the Kashmiri migrant traders also who lost not only trade goods but also their commercial premises and the government has not till date taken note of their suffering and loss. All the benefits that the government has proposed for the traders who have been affected by the recent floods should be extended to the Kashmiri migrant traders also, demanded Moza. He further added that those migrants whose houses were torched in the valley were sanctioned amounts not exceeding mere one lakh rupees as ex-gratia relief by the state government and for unfathomable reasons only half of this paltry ex-gratia was actually paid and it was said rest of the amount would be paid later on. It is high time that the remaining ex-gratia amount alongwith the commercial interest thereon be released in favour of the victims without any delay. BJP has been demanding since the time the migration took place. This would be in the fitness of the things at this juncture as the state government is in the process of undertaking rehabilitation on a astronomical scale and the amount involved for the Kashmiri migrants would be very insignificant compared to the total amount demanded and expected from the central government.
Lalit Moza further reminded the state government about the utterly tardy rehabilitation of the victims of Kishtwar communal riots and said that government should vigorously activate itself and bring out the victims from a state of great hardship and penury. Lastly, he also demanded that the relief for the migrants should enhanced to ten thousand rupees keeping in view the rise in cost of living.
State Spokesperson & State Press Secretary Balbir Ram Rattan was also present in the press conference.
SOURCE http://scoopnews.in/det.aspx?q=41795