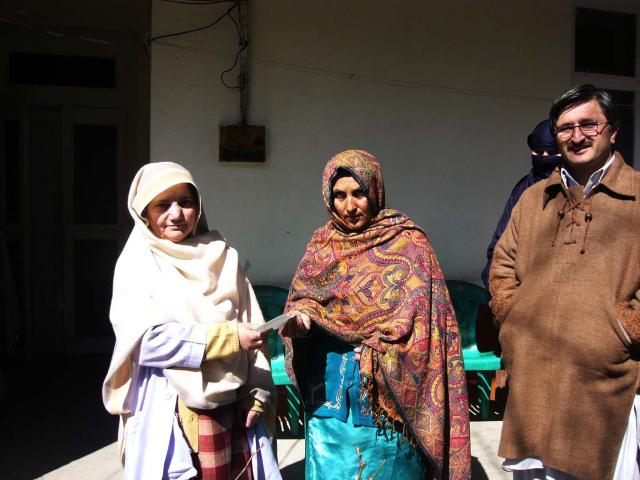 CHITRAL: Legal Awareness program for Human Rights (LAPH) supported a widow woman from Breshgram Karimabad area. In this connection member Board of Director and prominent Gynecologist Dr. Saleema Hassan presented a cheque of rupees 30000 to Rashida Bibi widow of Walayat Khan on behalf of Chairman human rights. LAPH supporting  poor widows of Chitral to rehabilitate them by launching their micro business to gain their livelihood.

An important meeting of Gujar community was held here at Drosh some 45 KM from here under the chair chairman of Gujar Youth Forum and former Nazim union council Sheshi koh Sher Muhammad Khan. The meeting was also attended by  formers Nazimeen, Councilors and a large number of elites of the area. An unanimous resolution was also passed in the meeting. Different leaders expressed their views on this occasion. The participants expressed their concern over the deteriorating law and order situation at Chitral district. Especially ransom cases, dacoity, and other social evils. They appeal to the district administration to control increasing number of these social evils causing for law and order situation. They also welcome imposing of Sharia Muhammadi in Malakand Division and appreciated this step of provincial government. They expressed their great concern over deteriorating situation in the district which his fearing to declare Chitral as situation in Swat. The whole population of Chitral were appeal to support government in controlling crime ratio in the district. They also emphasized on Gujar community who living in such passes where infiltration and dacoits interring in Chitral to control their way.

They demanded from the government for early arresting of those criminals who were involved in ransom of two persons and giving them exemplary punishment. They also urged for early recovery of arms and ammunition snatched from police post at Gadibar by some unknown culprits a few days back. They also demanded for recovery of 600 goats theft by dacoits and shifted to Nooristan area of  and arresting of dacoits to discourage such practices in the district.

An emergency meeting of District Bar Association (DBA) Chitral was held at Bar room under the chair Syed Iftikhar Hussain Jan advocate president DBA Chitral. Members of DBA discussed the present political scenario in the country. Through a unanimous resolution they condemned Governor ruling (rule) in province. The DBA declared that they accepting only Iftikhar Muhammad Chaudhry as Chief Justice of Pakistan. Through a unanimous resolution they demanded for restoring of 2nd Nov judiciary and finishing of non-constitutional Governor ruling in .