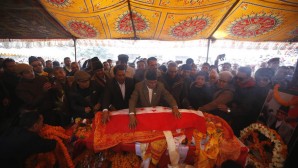 The Nepal Government on Wednesday offered a state salute to the Late Former Prime Minister Sushil Koirala, who suddenly passed away at 24:50 on Tuesday. Late Koirala’s personal physician Dr. Karabir Nath Yogi informed media of the cause of Koirala’s death as pneumonia. 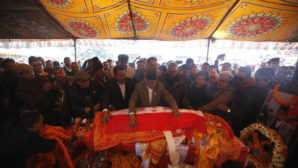 The Nepali media outlets have been highlighting available biographical notes to remember late Koirala. The two major remembrances about him have been associated with his non-corrupt political career and the recent promulgation of the long-awaited republican constitution under his prime ministership.

Appreciating late Koirala’s non-corrupt political life is justice to him. Generally, leaders given to amassing wealth through nontransparent sources instead of serving public interests seem morally too weak to derive a moral lesson from late Koirala’s moral standard. Equally worth remembering is his proven determination for the promulgation of the new constitution—now a reality.

However, the Nepali society does not find late Koirala distinct from the perspectives of leadership capacity—a deep-rooted and severe crisis in Nepal, where individuals in all sectors apparently over-ride the constitution and laws, intentionally jeopardizing the lives of the hand-to-mouth majority.

The 68-year old Nepali Congress (late Sushil Koirala became its President in 2010) has apparently lacked an intra-party democratic culture and a national vision for institutionalizing democracy. Individual money-mongering business contractors and brokers have completely taken over the party, incapacitating it to the roots. The worst are other dozens of groups who prefer to label themselves as ‘marxists’ or ‘communists’. These groups, determined to finish off one another, have never demonstrated even a common sense to chart out some party policies on vital public issues such as drinking water, education, health and public transport.

Having taken advantage of the moral and intellectual bankruptcy of the leading parties, monarchists and other rightists have begun to preach against the universal principles of human rights and democracy.