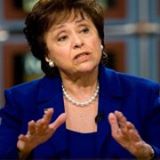 “Mr. Speaker, bring up the bill to end the Republican shutdown immediately”, said Rep. Lowey. Lowey is the Ranking Democrat on the powerful House Appropriations Committee.

On October 7, 2013 Rep. Nita Lowey of New York asked for and was granted permission to address the United States House of Representatives for one minute regarding the Republican led government shutdown that is devastating the lives of millions of Americans who have no idea when or if they are getting paid, how this is going to affect their future and the future of the entire country.

“Mr. Speaker, I rise to call once again for this House to end this shutdown now by passing the Senate-passed bill that the President will sign to reopen the government.”

“Speaker John Boehner refuses to bring up this bill. This weekend, he claimed it doesn’t have the votes to pass. While I am no mathematician, basic math shows that the Senate-passed bill to end the shutdown would pass the House; 217 votes are needed for a bill to pass. Look at these numbers. With the votes of 198 Democrats and the 23 Republicans who have said publicly that they would support the bill, the bill would pass with 221 votes”, she said.

Rep Lowey is the Ranking Democrat on the powerful House Appropriations Committee. As such she commands a lot of respect among members of both sides of the political divide in Congress.