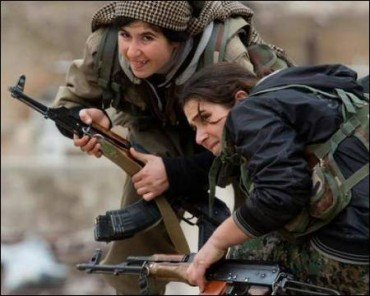 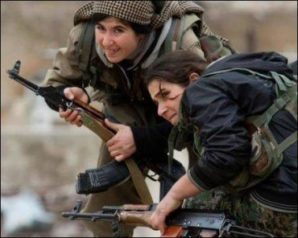 Female Kurdish fighters engaged in combat with ISIS in Jan 2015.

On June 17, 2015 Representative Ed Royce of California asked for and was granted permission to address the United States House of Representatives for the purpose of discussing the situation with ISIS in Iraq and Syria.

Some of his comments are as follows:

“Mr. Speaker, I rise in opposition to H. Con. Res. 55. But while I am opposed to this resolution, I do want to commend its author, Mr. McGovern, for his constant and principled attention to the issue of U.S. military engagement in Iraq and Syria and the role of Congress in making this decision. These are some of the most important and challenging issues that we face and that we struggle with as an institution.

I know the gentleman from Massachusetts is frustrated. I have listened to him on the floor of the House. In many ways, I share his frustrations. ISIS is making too many gains. Critical cities have fallen. But this resolution, I believe, would take us in the opposite direction of where U.S. policy should be.

H. Con. Res. 55 calls for the unilateral withdrawal of U.S. forces from the fight against ISIS, halting all U.S. strikes against the terrorist group in Iraq and Syria. It would also leave ISIS unchecked–not only unchecked by U.S. airpower, but it would allow this brutal terrorist group, as I say, to gain strength, to destabilize the critical region, and to create a safe haven from which ISIS can plot attacks against the United States.

H. Con. Res. 55 has nothing to do with authorizing the use of military force against ISIS but would unilaterally withdraw U.S. forces from the fight.

Last year, debating another Iraq measure offered by Mr. McGovern, I said: “Never has a terrorist organization itself controlled such a large, resource-rich safe haven as ISIS does today. Never has a terrorist organization possessed the heavy weaponry, the cash, the personnel that ISIS does today, which includes thousands of Western passport holders.”

Well, unfortunately, it is worse today. Just weeks ago, Ramadi, a city only 75 miles from Iraq’s capital, was overrun by ISIS and by its suicide bombers who led that first wave.

ISIS’s goals are very clear: wreck every person opposing it, establish a caliphate, and then fight to expand it. ISIS has unleashed a campaign of brutal and depraved violence, not only against Shia Muslims and fellow Sunnis who do not share their radical beliefs, but against vulnerable religious and ethnic minorities. As one witnessed testified to the Foreign Affairs Committee the other day: “We cherish ethnic and religious diversity. ISIS hates it.” And they hate in some of the most brutal ways possible.

Mr. Speaker, many Americans may not realize that Iraq and Syria are home to dozens of ethnic and religious minorities, with ancient cultures with very deep roots. These communities–Assyrian and Chaldean Christians, Yazidis, Alawites, and many others–are under mortal threat in their ancestral homelands.

The mass execution of men, the enslavement of women and young girls as concubines, and the destruction of religious sites is part of the ISIS effort to destroy these communities. Their plan is to make it as if those societies never existed, those religions in that area never existed. In fact, ISIS maintains a special battalion–they call it the ” demolition battalion”–charged with obliterating religious and historic sites and artifacts that it considers heretical.

ISIS has used the “virtual caliphate” on the Internet to recruit foreign fighters at an unprecedented rate. Some 20,000 of their fighters are, in fact, from offshore, are foreign fighters drawn to the area from some 90 countries. Those are the numbers that now are swelling its ranks. According to intelligence estimates, this includes at least 150 Americans that we know of.

Yet over the last 10 or so months, the administration has put forth a reluctant and half-hearted and ineffective effort to assist our partners there on the ground. I think we all recognize that this is up to the Iraqi Government to fight to win this. We understand that. They are in the lead. But they desperately need help. And I am not prepared to say that we shouldn’t be providing any military support to the Kurds strung along a 180-mile, or several hundred mile, front, with 180,000 soldiers.

Thirty percent of those Kurdish soldiers are female. And those young women are down there with small arms trying to hold off ISIS fighters along that line. I am not prepared to say that we should not be providing any military support for those Kurds or for the Iraqi forces and any air support whatsoever.

That is what this resolution does.

It didn’t have to be this dire. Well over a year ago, when ISIS was building its force in the desert in Syria, it wasn’t bombed and devastated when it could have been. It should have been. Many called for an effort at that point to have an air campaign by the U.S. and our partners to pummel ISIS as it moved across the desert in these long columns and begin the process to take city after city. It came out of Syria. First it headed to Fallujah, and there was a call to use air power to suppress and use ISIS then. That step was not taken. And for 14 separate cities, city after city, all the way to Mosul, we watched every time the request be made for air power, and that was turned down.

Well, we are where we are now. And, frankly, the air campaign by the U.S. and our partners isn’t pummeling the enemy now, as it should. Daily airstrikes against the Islamic State are one-sixth of what they were in the first campaign against the Taliban back in 2001. U.S. Special Forces should be authorized to call in airstrikes. Most Americans would be puzzled to learn that Canadian Special Forces are doing this, but we are not.

Pilots complain of having their hands tied. It has been estimated that three-quarters of U.S. aircraft return to base without discharging their weapons because of overly restrictive rules of engagement that don’t allow them to engage ISIS. As one observer notes, with just “piecemeal attacks, the Obama administration has been systematically squandering our air power advantage.” I think that is right.

Adding to the problem, the regional forces on the ground that these airstrikes are supposed to be supporting are badly undersupplied. After 10 months of fighting, there are still too many reports that the Kurdish Peshmerga, our allies, are outgunned on the front lines against ISIS. I have met with their foreign minister three times now as he has made this case. Again, 30 percent of his battalions, Kurdish battalions, are female battalions, and they can’t obtain the antitank weapons, the artillery, the mortars to use against ISIS in this battle.”