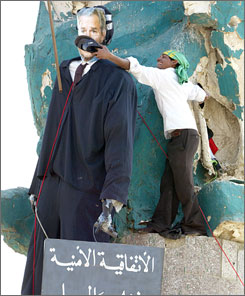 On June 17, 2014 Rep, Sherman asked for and was granted permission to address the United States House of Representatives for one minute regarding various issues in the Middle East:

Maliki was so malevolent that, throughout 2006, 2007, and 2008, he refused to enter into a long-term status of forces agreement with the United States and with President Bush. He insisted that any troops that remained in Iraq after 2011 would be subject to Iraqi kangaroo courts and could be executed on trumped-up charges. Obviously, we couldn’t leave our troops in Iraq under those circumstances.

As to Sergeant Bergdahl, it is important for us to note that, while we have just released five prisoners from Guantanamo, President Bush released over 500 from Guantanamo, and virtually all of them were dangerous.

What did President Bush get for the release, not of five, but 500 dangerous prisoners from Guantanamo? Nothing, except a thank you from their native governments.

Now, on legal issues, we are told that section 1035 of the National Defense Authorization Act required President Obama not to release the five prisoners until 30 days after he notified Congress.

More importantly, the President has the constitutional right, as Commander in Chief, to engage in prisoner exchanges. In fact, the last Republican Attorney General of the United States, Michael Mukasey, said that very thing just recently.

The President was on firm legal ground in deciding he had the authority to take this action without a 30-day notification of Congress. That being said, it would have been preferable if President Obama had, in fact, discussed the matter with key congressional leaders.

America is strongest when the President views Congress as a source of counsel, a source of advice, rather than a group of enemies to be notified only when such notification is explicitly compelled by congressionally valid statutes.

Whether this deal is a good deal, time will tell. It was a judgment call, but the President could have benefited from the counsel of Congress. It is particularly insulting for some to say that Congress is not a source of counsel, but just a source of leaks.

Keep in mind that 16 congressional leaders knew that we had ascertained the hiding place of Osama bin Laden, and that information did not leak from Congress.

I hope, in the future, President Obama and future Presidents consult key Members of Congress when making a difficult decision.

We are told that we don’t negotiate with terrorists. Nothing could be further from the truth. President Bush negotiated with each and every terrorist regime, each and every identified state sponsor of terrorism–Cuba, Iran, Sudan, Syria, North Korea.

The Bush administration paid a ransom to an al Qaeda affiliate for the release of Martin and Gracia Burnham. Secretary Colin Powell designated the Afghan Taliban as an organization authorized for legal negotiations.

Now, it is also said that a prisoner exchange alerts our enemies to the fact that we value our prisoners, that we will not want to leave anyone on the battlefield, as if this is news disclosed to the world in June of 2014. The fact is we have always valued those detained by the enemy, and the enemy has always known that”, said Sherman

Filed under: News, Politics
Share Tweet Pin G Plus Email
previous article: “I firmly believe Iran has no inherent right to enrich any nuclear material and that any deal should completely dismantle their nuclear infrastructure”, said Rep. Holding
next article: “Peace can only be maintained by strength as the terrorists proclaim: Death to America, and death to Israel. They mean it”, warns Rep. Joe Wilson