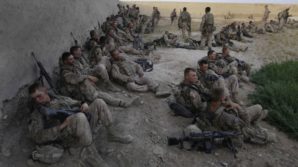 Exhausted US troops in Afghanistan.

On February 25, 2014 Rep. Joe Wilson of South Carolina asked fro and was granted permission to address the United States House of Representatives for one minute regarding proposed troop reductions by the military.

“Mr. Speaker, Defense Secretary Chuck Hagel outlined a proposal yesterday calling for a troop reduction that will shrink our Army to its smallest size since World War II began in 1939.”

“This decision is sad proof that the President’s priorities will threaten thestrength of our military at a time of worldwide instability as al Qaeda and its affiliates develop safe havens across North Africa, the Middle East, and Central Asia with an intent to destroy America”, he said.

“This past week, I participated in a delegation led by Foreign Affairs Committee Chairman Ed Royce to Asia. In Japan, South Korea, Taiwan, and the Philippines, we met national leaders who are building their militaries to face the rising threats and promoting peace through strength. Efficiencies must be made to maintain our end strength. The President has misplaced priorities and chosen to place our brave men and women in uniform on the chopping block in order to spend more money promoting Big Government dependency. National defense is the first duty of the national government, as promoted by the Military Officers Association of America”, said Congressman Wilson (source: Congressional record http://thomas.loc.gov/).

Filed under: Military, News
Share Tweet Pin G Plus Email
previous article: Experts say RIL is at no fault in its Gas Exploration Practices
next article: President Obama extends declaration of National Emergency with respect to the Government of Cuba