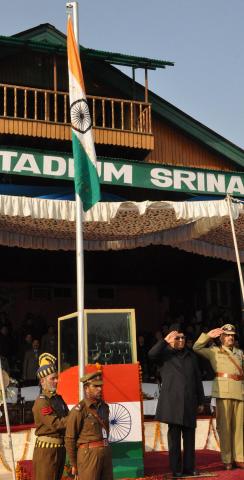 ,January 26 (Scoop News) –  Like other parts of the Country, the 62nd Republic Day was celebrated throughout the Valley with traditional fervour and gaiety.

The main faction was held at Bakshi Stadium Srinagar where Finance Minister and Ladakh Affairs,  Abdul Rahim Rather unfurled the Tri-colour, inspected the parade and took salute on the march-past. The march-past was presented by the contingents JKAP, District Police, BSF, CRPF, Auxiliary Police, Ladies Police, Fire and Emergency Services, Home Guard and NCC.

He said the main feature of this constitution is complete freedom of religion to all sections of the people. He said, however, some forces are bent upon to divide the country on religion and caste basis. He further said that when the whole sub continent was under the fire of communalism in 1947, it was the state only which upholds the traditions of brotherhood and communal amity. He further said Mahatama Gandhi in view of this situation of at that time had said that “I see a ray of hope in the state”.

Referring to the development achieved by the country, the Finance Minister said though the country had made tremendous development in various sectors, particularly in science, technology, industries, rural and urban development, education, health, etc however, yet we have to make strides to march further ahead and made it a country where there will be no unemployment, communalism and starvation.

Rather while referring to the development of the Jammu and Kashmir said that since the present government under the dynamic leadership of  Omar Abdullah came in to power, the first two years were very peaceful and said that a famous magazine of the country ‘India Today’ in a survey has given the first place to the health, NREGA and Education sectors of our state. He further said that during the recent months of unrest, the people faced tremendous difficulties and it also affected our economy badly. He further said that any problem can be solved through dialogue adding that confrontation yields nothing.

Referring the visit of the interlocutors, the Minister said that the Centre has already taken initiative so that the lasting solution of this prolonged problem is carved out soon through the dialogue. He further said that since  Omar took reigns of the present government he described the issue a political one and stressed for its political solution. He said we want that the two neighbouring countries and may come more closer and solve all there pending issues through meaningful dialogue.

Rather further said that in the next month the talks between the Foreign Secretaries of the both the countries are taking place which is an encouraging sign.

The Minister said that is a very backward state and is reeling under many problems and urged people for joint efforts to put the state on the development path. He said the state faces many problems and for their solution, the peace is imperative and for the restoration of the peace all of us have to work jointly. He further said the Finance Commission has been constituted to get feedback of the necessities of all the districts and the report of the commission will be submitted in the legislative constitution council.

Referring to the important role of the government employees, the Minister advised them not to desist from confrontation because it only adds woes to the people. He said despite financial crunch, the state government implemented the 6th pay commission while the employees of many states of the country are yet to be benefited by this implementation. He said the government is committed to solve their problems.

He said that unemployment is a biggest problem of the state and the government is alive of this issue. However, he said that more than 22000 unemployed youth have been adjusted through JKP, SSB and UPSC and the process continues. However, he asked the youth to come forward and get benefitted by SKEWPY and said the banks are giving loans to the unemployed youth on very low interest rates.

Rather said that the government is going to constitute Skill Development Institutes in all districts for imparting skill training among youth.

On this occasion, the Finance Minister announced a prize of Rs. One lakh for the artists who participated in the cultural programme.

Similar functions were also held at all district headquarters also.

Bandipora: Minister for CA&PD,  Qamar Ali Akhoon today hoisted the National Flag at a colourful function organised at Bandipora in connection with celebration of 62nd Republic Day. He took salute at march past comprising the contingents of JKP, JKAP, CRPF, NCC and school children.

DDC Bandipora and other senior officers were present on the occasion.

Addressing the gathering, the Minister said that the state has passed through turmoil during recent decades which has affected the people adversely. He said Indo-Pak friendship is must for peace, development and prosperity of . He said that the coalition government under the leadership of  Omar Abdullah has launched a massive development programme in the state and the work on numerous projects is presently under progress.

Ganderbal: Minister for Rural Development, Panchayat and Parliamentary Affairs,  Ali Mohammad Sagar hoisted national flag, inspected parade and took salute on the march past at Ganderbal on the eve of Republic Day.

Addressing on the occasion, the Minister said that any issue can be solved only through meaningful dialogue. He said that Late Sher-i-Kashmir, Shiekh Mohammad Abdullah fought against the autocracy and provided a platform for democratic setup and said Sheikh Mohammad Abdullah worked shoulder to shoulder with Maulana Abul Kalam Azad, Pandit Nehru, Khan Adbul Gafar Khan during the freedom movement of India.  Sagar said due to the untiring efforts of Sheikh Sahib, this state progressed on various fronts.

He said due to recent unrest in the valley, the pace of the development was affected to some extent, however, by the cooperation of people the peaceful atmosphere has been restored and the state has been again put on the developmental path.

Referring to the Kashmir issue, he said that the team of interlocutors set up by the Centre is visiting and are talking to all sections of people so that lasting solution of the problem is carved out.

Baramulla: Minister for Education, Peerzada Mohammad Sayeed unfurled the tricolor and took the salute at the march past.

The Minister on the occasion said that the coalition government is committed for speedy development of the state and in this connection many steps have been already taken. He thanked the Central Government for liberal funding to the state and appreciated district administration for spending 75 percent allocation in the current fiscal.

Minister of State for Health, Works,  Javaid Ahmad Dar was also present on the occasion.

Kulgam: Minister for Forests, Mian Altaf Ahmad hoisted the national flag and took the salute on the march past at Kulgam on the Republic Day celebrations.

Addressing on the occasion, the Minister referred the sacrifices of the leaders for liberating country from the clutches of the Britishers. He said that is a biggest democratic country in the world and the constitution of provides equal rights to every citizen of without any discrimination of caste, creed, color and sex. He further said that the J&K state presently is on the development path under the dynamic leadership of  Omar Abdullah.

Anantnag: Minister of State for Haj, Auqaf and Fisheries,  Aijaz Ahmad Khan unfurled the tricolour and took salute at the march past presented by the contingents of belt forces.

While addressing on the occasion, he said on this day the Indian constitution came into existence which provides rights to every citizen of . He said that 80 percent of our country lives in the villages and said unless the villages are developed in all respects, we cannot say the country has marched towards the overall development.

Budgam: Minister for Agriculture,  Ghulam Hassan Mir hoisted the national flag and took salute at the march past.

On this occasion, the Minister said that we must forget the past and rededicate our minds to put the state on the right path. He said that the state has witnessed a great loss during the recent unrest in the valley which shattered the economy. He said the peaceful atmosphere is necessary for the overall development of any nation. He appealed the youth to extend their cooperation is taking the Jammu and Kashmir to new heights of progress and prosperity.