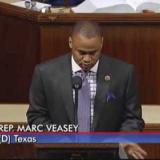 “Once again, we’ve been pushed to the brink of a government shutdown by fringe Tea Party members whose only goal seems to be to deny hardworking taxpayers the right to insurance”, said Rep. Veasey.

On September 28, 2013 Rep. Marc Veasey of Texas asked for and was granted permission to address the United States House of Representatives for one minute regarding the government shutdown.

“Mr. Speaker, we are faced with the threat of a government shutdown on Tuesday due to the Republican Party/Tea Party extremists’ inability to compromise and pass a spending bill for fiscal year 2014.”

“Once again, we’ve been pushed to the brink of a government shutdown by fringe Tea Party members whose only goal seems to be to deny hardworking taxpayers the right to insurance”, he said.

“While the Republican-led House has voted 42 times to sabotage uninsured Americans gaining health care coverage, not once have they allowed a vote to repeal and replace the sequester. Over 400 hardworking taxpayers in Fort Worth, Texas, have lost their jobs at Bell Helicopter due to the sequester. To make matters worse, once again Republicans are placing the livelihoods of American families at risk by threatening to furlough government employees. The bottom line here is that Congress has a lot of work to do this weekend and in the weeks and months to follow. This is the work that we as Members of Congress were elected to do. I take this responsibility very seriously and expect my colleagues to as well”, said Rep. Veasey (source: Congressional Record http://thomas.loc.gov).

As a Member of the U.S. House of Representatives, Rep. Veasey is highly respected and serves on the House Armed Services Committee and the Science, Space and Technology Committee.