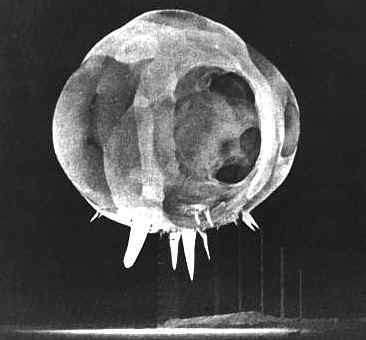 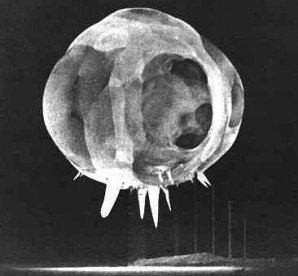 Globular cloud of radiation and debris rises into the sky seconds after the detonation of a low yield atomic bomb in the 1960s.

Well what do you think – is it a good idea to deploy a nuclear bomb in Korea?

Apparently to some Republicans in Congress, “that is a very good idea.”

It mandates that the Secretary of State (Hillary Clinton) and Defense Secretary (Leon Panetta) submit a report on the 1) feasibility and 2) logistics of redeploying forward-based nuclear weapons there, “in response to the ballistic missile and nuclear weapons developments of North Korea and the other belligerent actions North Korea has made against allies of the United States.”

The amendment, sponsored by Rep. Trent Franks (R-AZ), was approved by a vote of 32-26, with all Republicans, except for Rep. Randy Forbes (R-VA), and two Democrats in favor (see Amendment:http://www.foreignpolicy.com/files/fp_uploaded_documents/120510_amd_report_DPRK_xml.pdf).

The Amendment is seen as an indication of the direction the Republicans want to take us.
“The Republican Party has always had a romance with tactical nuclear weapons. They have always seen them as a way to reduce the need for manpower and to reduce the size of the budget,” Morton H. Halperin, former US undersecretary of defense for policy, told The Korea Herald last week.

“It is a foolish idea.”, Halperin said. Adding: “I don’t think there is any chance that this administration will do it, and I don’t think there is any chance any future administrations will do. Remember? It was George Bush who took the nuclear weapons out of not only Korea, but all of Asia”, he said. See article: Calls for tactical nuclear weapons foolish: former senior US officialhttp://news.asiaone.com/News/AsiaOne%2BNews/Asia/Story/A1Story20120604-3… ).

Is it a stupid idea?

We did however asked one U.S. defense expert if there was a problem or something, in our ability in destroying that part of the world? And why a forward deployed nuclear capability in Korea could be rationalized in the minds of some people in Congress as a good idea?

What he said was shocking!

Apparently is not so easy to “obliterate” North Korea as pushing a button.

“Destroying North Korea, is not the problem we can do that 100 times over”, a civilian expert said. “The problem is political, I think, even for the US to use a nuclear weapon such as an intercontinental missile against North Korea. Why? Think about it, for a moment. First because we would have to fly it over Russia which could be mistaken as an nuclear strike against their country. Remember you only have seconds to decide in such a case, if you are the President of Russia. A submarine-launched missile would be going towards China, and the Chinese military could easily mistake it for a pre-emptive U.S. nuclear strike against them and retaliate by launching missiles of their own! The only way around that would be, for example, to inform Russia and China in advance that you plan on exploding a deadly nuclear weapon in a neighboring country and killing millions of people. That could also be rather embarrassing for President Obama to explain. Because no one in their right mind would agree with it…”he explained.