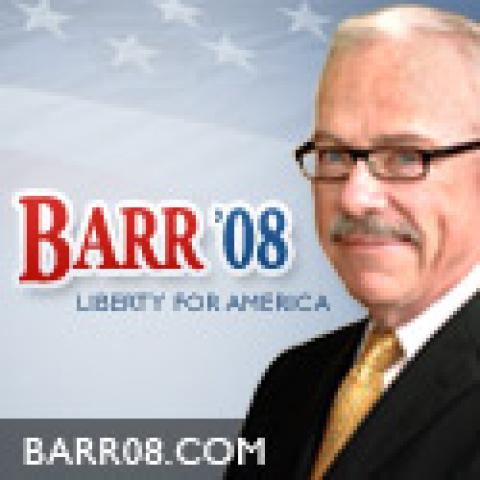 Representative Ron Paul, M.D. (R-TX) www.RonPaul2008.com became a phenomenon in the 2008 USA presidential election campaign thanks to his provocative appearances in the TV debates and the echo effect of the Internet support they engendered.  https://www.groundreport.com/Politics/The-Bomb-That-Heals

On April 30th, Ron Paul’s book The Revolution: A Manifesto will be released generally to the public.  Not having read an advance copy, I cannot review it yet.

But I went to my bookshelf and took down my autographed copy of Ron Paul’s Freedom Under Siege: The US Constitution After 200 Years.  Originally published by Dr. Paul’s Foundation For Rational Economics & Education in 1987 and serving as a campaign book for his 1988 Libertarian Party www.lp.org presidential campaign, it was republished 20 years later in 2007 by The Ludwig Von Mises Institute www.mises.org.  Many thanks to them. It would be interesting to compare if changes were made in the 2007 edition.

Ron Paul began "Two hundred years ago the United States Constitution was written as a guide for America’s unique experiment in freedom. Today the free society that the Founders envisaged is barely identifiable."

These words remain all too true today.  Paul puts forth a philosphy founded on respect for individual rights and structured by fidelity to the US Constitution.  He criticizes both liberals and conservatives for their trespasses against individual liberty.

Paul offers what is probably a unique to me rejection of the draft, not just as slavery, but a violation of the right to life.

Closely identified with monetary policy, Dr. Paul is somewhat inaccurately described as a "gold bug."  However, he does declare that "Sound Money Is Gold." His extensive discussion of monetary policy and history makes it clear that it is the market which should decide what money or monies are in use.  The Federal Reserve fiat money system should be abolished.

In Dr. Paul’s words, "Honest money must come into circulation through honest work and effort and be a commodity, voluntarily used by all the participants in the transactions.   No legal-tender laws are needed to compel its use if an honest monetary system is in place."

"A truly free society is one that offers the greatest hope for peace and prosperity. The moral defense of the individual’s right to life and liberty associated with the prosperity that can only come from a free market makes it easy to defend.  However, the marketing of this ideal has not been successful….

In a a free and prosperous society, labor shortages would be the problem, not unemployment.  Instead of aliens being resented, they would be welcomed to serve our needs as our standard of living increases… This can only come about by freeing the marketplace and introducing sound money….

…   Free movement of people, goods, and ideas across borders makes  a lot more sense than the uncontrolled sale and transfer of weapons across borders.  A policy of neutrality and friendship to all makes a lot more sense than subsidies to our sworn enemies and our rich allies.  Financing both sides of all the battles around the world, as we have been doing for the past forty years, must come to an end…

Free markets, sound money, balanced budgets, no income tax tax, civil liberties, and nonintervention in the internal affairs of other nations is the road to peace and prosperity.

How can the American people reject it?"

I am curious to see whether the 2007 Mises Institute edition and the forthcoming The Revolution: A Manifesto differ signficantly from the 1987 FREE edition of Freedom Under Siege.   I hope not.

In many respects, I wish that Dr. Paul continued the 1987 message now.  He has gone signficantly astray on immigration and trade, where his statist current views undermine individual liberty even if they are cloaked in that language.  While he claims to still support free trade, it appears to me that his advisers have made him try to pander to the paranoid xenophobic antimarket beliefs of "protectionists" (better described as aggressionists).  Perhaps Dr. Paul should go back to fundamentals such as those in Freedom Under Siege.

I work with NAFTA daily in serving my customers in USA, Canada and Mexico.  The statements he and his supporters make about it are fantasies.   What is more important, individual liberty or national soverignty? NAFTA may be bad, good or middling policy. It is neither unconstitutional nor an infringement of American soverignty.  It provides for mutual reductions in tariffs on an agreed range of goods.  It exempts certain goods from tariff reduction that each country’s government would not agree to have covered.

PS: Since this was written the Libertarian Party nominated former Congressman Bob Barr of Georgia for President.

On the Bricker Amendment

(About the author: Richard Cooper is the export/import manager of a Long Island manufacturing firm.  He has contributed to Ron Paul presidential, congressional and senatorial campaigns.  He was a Ron Paul delegate in the February NY Republican primary.  He has served as Chair of the Libertarian Party of New York www.ny.lp.org).