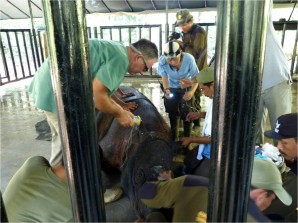 Wildlife inventories can be a shocking reality check, especially when extinction looks near.

Early this year, Sumatran Rhino conservationists were shocked when population estimates of Sumatran rhino dropped from 300 to less than 100.

They called an emergency summit in April in Singapore because the population of about 80 in Sumatra is so fragmented by habitat loss that they “don’t tend to meet for breeding”.

Malaysian Borneo is the only other place the Sumatran rhino still lives, but estimates there are as low as only a couple.

The added tragedy for these isolated pockets is if females don’t breed they suffer degeneration of their reproductive organs and become infertile in as little as five years.

The clock is really ticking for these girls.

The April summit came up with strategies in “a last ditch effort” to save this mystical species, a species which descends from one of the earliest recorded mammals in history.

The priority is to get the breeding ball rolling by bringing the individuals out of their isolation and into viable breeding groups.

There’s lots of challenges just to find this incredibly cryptic creature in the dense Sumatran Jungles, let alone transport them, resettle them, keep them in optimal health and social conditions for breeding, and protect them from further habitat loss and poaching.

A vet from Taronga Western Plains Zoo near Dubbo, Benn Bryant is uniquely positioned to help the Sumatran rhino avoid the abyss and to do this he’s been cooperating quite closely with a Sumatran rhino super stud.

Bryant is an expert in rhino medicine and a pioneer in the chemical restraint of these powerful creatures. He can hold them in the limbo between fatally going too deep into anaesthesia and waking up suddenly and possibly freaking out and killing someone.

Western Plains Zoo, where Bryant works, has a world class rhino breeding program and is one of the only zoos in the world with three species of rhinos. It’s also relatively close to Sumatra, so Bryant can respond to emergencies immediately and be at a sick rhino’s bedside in a day.

He has just come back recently from Indonesia’s flagship project to the save the species, which is an amazing Noah’s Ark in the jungle.

The Sumatran Rhino Sanctuary Sumatran Rhino Sanctuary, a 250-acre complex located within Way Kambas National Park, has five rhinos including its Adonis-like breeding male named Andalas, three females and the first ever rhino calf to be born in captivity in Indonesia. The significance of the three fertile females is immense because if you consider the unique infertility problems female Sumatran rhinos face – if they don’t use it they lose it – it’s likely there’s only “10-15 breeding females on the planet.”

There are only three other Sumatran rhinos in captivity in the world, in an American zoo. The male is geriatric so there’s a lot of pressure on Andalas to be the big stud, which is probably ok as he’s a bit of a poster boy, a bit of an all American jock. He was actually born in 2002 in Cincinnati Zoo in America.

Bryant recently paid a special visit to Andalas in June to get some of his sperm to help safe guard the species.

Unfortunately for Andalas the procedure wasn’t every male’s dream, but providently for the species his sperm is now frozen for use in case anything should happen to him.

“He [Andalas] was the first Sumatran rhino to be born in a captive situation or in a zoo in 120 odd years when he was born, so his birth was a major, major breakthrough in the potential for zoos to contribute to Sumatran rhino conservation,” Bryant says.

“He’s zoo bred so he’s a reasonably used to people, he’s adapted to forest life living in the jungle, he’s quite familiar with people, everyday he’ll come down to one part of his forest enclosure, he’ll stand on a scale, the keepers will hose him down, look for ticks.

“He’s a very tolerant animal, but he’s still a wild Sumatran rhino and he could or would do you damage if he thought he needed to.”

At 11 years old Andalas is irreplaceable coming into his prime. In the five years since sexual maturity he’s developed male prowess and rhino social skills and is the only competent breeding bull in captivity in the world.

So it is important for an expert to be on call for veterinary consultancy or contingency services and Bryant is always ready to fly from Dubbo to Sumatra at short notice if Andalas or the females or calf need treatment.

To be the doctor at this critical point in the ancient species’ history also has its pressures, especially when the animals are under anesthesia like during the recent procedure for semen collection.

“These animals are so rare and so precious… It’s hard to relegate the importance of the individual to the back of your mind. It can be nerve wracking,” Bryant says.

“It’s now, or there’s no hope” is the way Bryant sums up the gravitas of the April summit to save the rhino. The summit decided the priority was to unite the fragmented breeding population by tracking, catching and transporting wild individuals and placing them together.

Bryant says there needs to be some consideration whether this kind of extreme intervention would have the unwanted side-effect of alerting poachers of the whereabouts of Sumatran rhinos which to date have cunningly sidestepped all human contact year after devastating-habitat-loss year.

Bryant says it wasn’t mentioned at the summit but agrees it could be a concern. He points out though that the Indonesians have very effective enforcement measures using trained Rhino Protection Units (RPU)

Thanks to the effectiveness of the RPUs, there haven’t been any cases of rhino poaching recorded in in five years.

The main threat to the Sumatran rhino is habitat loss from palm oil plantations, he says.

It’s quite a different situation to the threat that poaching poses to South Africa’s white rhino,

He says the demand driving the spiraling poaching in South Africa is “bollocks” because the idea of using rhino horn for some medical benefit is “atrociously ridiculous”.

“To see a charismatic and amazing taxonomic group like rhinos go extinct because there’s some cockeyed notion that swallowing the powdered horn is going to give you some medical advantage is such a frustrating and ridiculous thing.

“It just seems immoral that a really pointless conservation threat is being imposed on them at this point in their history,” the wildlife vet says.

“They really are awesome to meet, incredibly cool and charismatic.”
To see more pictures of Andalas and listen to an excerpt from the interview with Benn Bryant go to Micsmithgeographic.

Ways you can help save Sumatran rhinos

Try to avoid buying products with palm oil. Palm oil is in a lot of vegetable oils and is used in soaps and almost anything that lathers such as shampoos