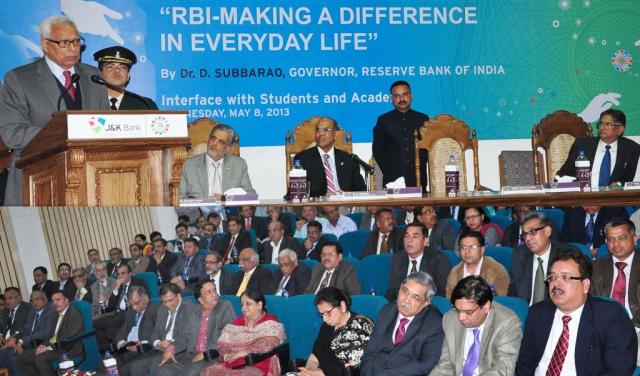 Srinagar, May 9 (Scoop News) –   N. N. Vohra, Governor Jammu and Kashmir, observed that Reserve Bank of India is a vital national institution which has been playing a crucial role in the economic development of the country. He particularly referred to the role played by the RBI during the challenging Balance of Payments crises in the early 1990s.

The Governor, who was Chief Guest in a seminar “RBI – Making a Difference in Everyday Life”, at the J&K Bank Corporate Headquarter,thanked Dr. Subbarao for acceding to his suggestion, made during his visit to Jammu last year, to address the university students during his next visit to the State. He hoped that during his future visits to J&K, Dr. Subbarao will talk to a much larger number of university and college students in the Kashmir valley and other regions of the State for the benefit of the student community.

The Governor thanked the J&K Bank and the Vice Chancellor, University of Kashmir for having arranged this interactive session with the RBI Governor during which he talked to us in a clear and precise manner on issues which are not generally easy to understand. He congratulated the Chairman, management, staff and all the stakeholders of the J&K Bank on its Platinum Jubilee celebrations.

The Governor, Reserve Bank of India, in his highly informative talk, dwelt on varied issues, including the mandate of the Reserve Bank of India and its role in the economic development of the country. This was followed by a lively Question-Answer session during which Dr. Subbarao replied to the queries of the students on several issues of financial management.

Earlier, in his welcome address,  Mushtaq Ahmad, Chairman, J&K Bank, dwelt on the establishment, evolution, history and growth of the Bank over the past 75 years. He also spoke about the various events which are being organized by the J&K Bank during its Platinum Jubilee celebrations.

Prof. Talat Ahmad, Vice Chancellor, Kashmir University, speaking on the occasion, thanked the Governor for taking the valuable initiative of arranging interactive session with the RBI Governor for the benefit of the students and the academia and for his keen interest and support in the growth of the University.

Mrs. Usha Vohra, First Lady, Deputy Governors of the RBI,  Navin K. Choudhary, Principal Secretary to the Governor, senior functionaries of the RBI and J&K Bank, students and academia were among those present on this occasion.