Residents of Unauj village protested against Govt apathy not construction of damaged bridge.

CHITRAL:  School going children both boys and girls, women folk and male persons protested at damaged bridge of Unauj village against the Govt apathy of prolonged delay in re-construction of suspension bridge.

chanting slogan against the district administration and concern department the anger protesters said that this bridge was damaged by flood last year. Residents of the area arranged a temporary wooden bridge on self help basis. As MPA of this area Syed Sardar Hussain Shah had assured them that he will approve fund for this bridge but he badly failed to vow his promise.

They alleged that on direction of MPA Sardar Hussain one of his nearest contracted demolished the broken pieces of bridge for the purpose to be used it in an other bridge but action on the same is still awaited.

Mehnaz Bibi a student of 9th class said that she along with her other class fellows daily goes to school on a temporary suspension bridge which is very dangerous and they feel fear while crossing it by feet. She said that MPA had assured them for construction of jeep able bridge last year but he still not released any fund for this purpose.

An other student said that she go to school for a long distance but due to damaging of this bridge it is not possible to cross a vehicle on an temporary bridge and they are compelled to travel by feet.

Baseera Bibi  said that  there is only one primary school but she can not reach school timely because they go  by feet through a long way. Lady councilor Huraira Bibi said that they submit so many applications for reconstruction of this damaged bridge but all in vain.

Zar Bahar a leader of Pakistan  Tahriki Insaf also complained of their government that their area are ignoring and neglected by authorities. Residents of  Unauj village demanded from Chief Minister KPK , Prime Minister and Secretary communication & Works for early construction of this bridge because in case of raising of water surface the present temporary wooden bridge would be washed away by flood in June July. 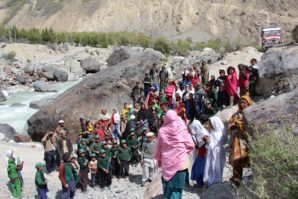 Residents of Unaouj village protesting against Administration demanding for bridge 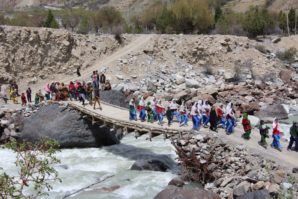 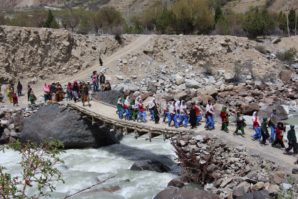 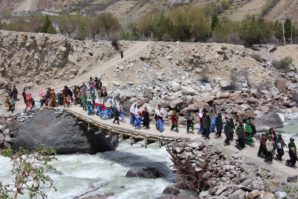 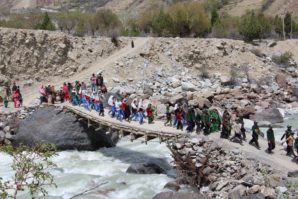 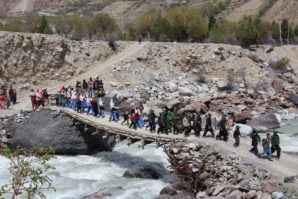