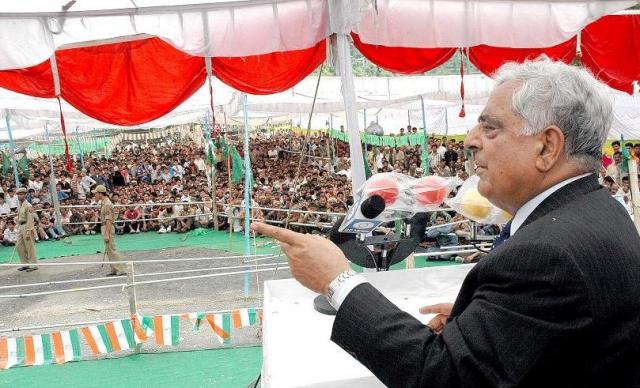 , September 16 (Scoop News)-    Peoples Democratic Party (PDP) has said  must get its share of development commensurate with its historical importance, economic significance and tourism potential. The top brass of the party including its patron Mufti Mohammad Sayeed, former deputy chief minister Muzaffar Hussein Baig, senior leaders Molvi Iftikhar Hussein Ansari and Tariq Hameed Qarra today reiterated their commitment to carry forward the implementation of its vision for a holistic development of the summer capital at a party workers convention in Batmaloo constituency.

Mufti said  was central to the development roadmap of the party forKashmir. “During the brief tenure from 2002 we initiated a holistic development ofSrinagar city which unfortunately was subverted by our successors out of sheer political vengeance and small mindedness” he said. He said  is the political, social and cultural nerve center of  and its infrastructure has to cater to the needs of entire valley and an ever increasing floating population including the tourists. “But unfortunately the city fell on bad times as a result of instability and lack of development vision among those who ruled the state for more than three decades, he regretted.

Referring to the major economic and development initiatives introduced by the previous government Mufti said for the first time external funding from the Asian Development Bank (ADB) was secured for the core infrastructure like roads, drainage and drinking water. While places like Srinagar were the supposed to be major beneficiaries of this program for which a special organization Economic Reconstruction Agency (ERA) in view of the damage it had suffered during the strife, its objectives could not be achieved fully as a result of inefficiency and corruption that marks the present dispensation. He said still a large number of residents could get access to clean drinking water, drainage and better roads but the present government failed to fully harness this program that envisaged a rapid transport system for the city. Not even a single fly over has been taken in hand in four years and government is only making hollow announcements. He said in view of the touristic importance of  the development should have been taken to a higher level by now but we are still fighting for very basic amenities. “We should by now have qualified for World Bank investment in infrastructure development but instead even the ADB seems to have developed cold feet in view of inefficiency in the government” he said. Mufti said it was a matter of shame that the city faced a virtual siege at its two major entry points, Parimpora and Pantchhokh and as a result all high profile visitors to  are to be ferried in helicopters to places like Gulmarg and Pahalgam. “With chaos on the roads reaching such levels travel for ordinary commuters has become a nightmare and funds for development are either lapsed or diverted” he said.

Mufti said his government had during its brief tenure started major projects forSrinagar that if continued would have made this city one of the best in the country to live in. “Our people deserve the best and funds are no constraint but it needs a government that has a political direction, vision and a commitment to people which are absent in the present dispensation” he said.

Mufti said he has a strong belief in the abilities of the people of  who have given  a distinct identity through their art, craft and immense contribution in the fields of literature, poetry and fine arts. He said the our youth are an asset that can be molded into the best human resource and PDP has a definite plan to make it happen.   “My vision for  is to restore its glory and the pre eminence of its people who have to play the most crucial role in the transformation of the state into a social and economic model” he said.

Filed under: Politics, World
Share Tweet Pin G Plus Email
previous article: The eastern and southern sides of the Brahmaputra valley
next article: Baig urges Srinagar to lead the change in state