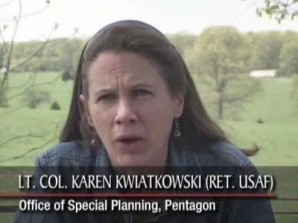 “We’ve used white phosphors, we have stood by and even provided the white phosphors, for the Israelis against the Palestinians. Well, most Americans are not really aware of this or not thinking about this, it’s certainly not reported in American news..”, Kwiatkowski said in an interview with the “Voice of Russia” broadcast.

In an article in September, that has been widely disseminated in Russia,  US Military Officer Karen Kwiantowski disclosed that the US supplied former Iraqi dictator Saddam Hussein with chemical and biological weapons during the 1980-1988 Iraqi war on Iran.

She also admitted that the U.S. has used terrible weapons as a matter of routine in conflicts over the past 15 years or more. Even going so far as  to use white phosphorus and depleted uranium in munitions used in Iraq and elsewhere and then lie about it.

When asked if she could elaborate on the U.S. use of deadly chemical weapons, here is what she said during an interview with “Voice of Russia” :

“We used depleted uranium to harden the tips of our various missiles. And when that explodes and becomes polarized in powder, turns into powder, it contaminates the soil and the water for decades, and it’s cancer-causing, and we have plenty of documentations of the problems, when we live and breathe in environment that is contaminated with depleted uranium.

We’ve used white phosphors, we have stood by and even provided the white phosphors, for the Israelis against the Palestinians. Well, most Americans are not really aware of this or not thinking about this, it’s certainly not reported in American news, it certainly sends the message that there are two sets of law in the Middle East – one for the United States and one for Arabs and others that live in the region.

So, yeah, we’ve done it. It’s old news how we took sides in the Iraq-Iran war, we actually aided both sides, but we did provide chemical weapons and biological weapons to Saddam Hussein as he was fighting in that long war with Iran. And we did this, it’s been well publicized.

So, yeah, we do this. In fact, we are not signatories to some of these chemical weapon non-proliferation things, and this is not a chemical weapon per se, but cluster bombs.

We will not swear off cluster bombs, we use cluster bombs, and, of course, they have terrible impact on non-combatants, they are dangerous for many, many years even after we’ve launched them.

So, we’d really don’t have a leg to stand on in terms of the terrible weapons that are used. War is ugly, and we are responsible in this country for prosecuting some of this war. So, I think that we can’t get away from it, that in fact is a mare” (source: US Provided chemical and biological weapons to Saddam Hussein : http://voiceofrussia.com/2013_09_12/US-provided-chemical-and-biological-weapons-to-Saddam-Hussein-retired-military-officer-4503/).

Karen Kwiantowski is a retired U.S. Air Force Lt. Colonel whose assignments included duties as a Pentagon desk officer and a variety of roles for the National Security Agency.

Since retiring in 2003, she has become a vocal critic of the U.S. government’s involvement in Iraq and other places.