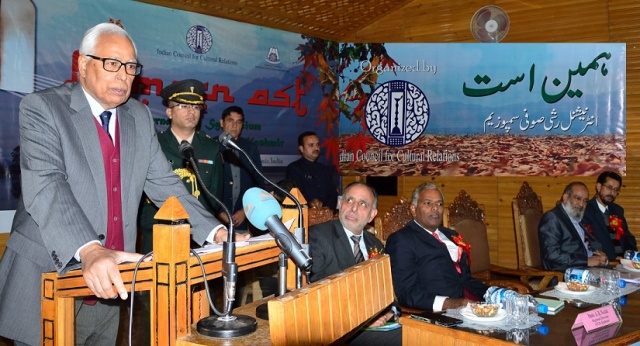 Srinagar, October 25 (Scoop News)-Governor N.N. Vohra inaugurated “Hami Ast”, a three day international symposium on the “Rishi-Sufi traditions of Kashmir”, at a function held here at the University of Kashmir today.This event has been organized by the IndianCouncil for Cultural Relations (ICCR), in collaboration with the University of Kashmir and the Jammu & Kashmir Academy of Art, Culture and Languages. Scholars from India, USA, Europe, Iran, Bangladesh and Afghanistan are participating in this event.
Naeem Akhter, Minister of Education was present on the occasion.
The Governor welcomed the participants and complimented the ICCR for organising this event. He observed that this event takes us back to over six hundred years ago when scholars and philosophers from several parts of the world were travelling to Kashmir to engage in prolonged philosophical debates which led to the evolution of the syncretic belief systems and traditions which, today, are popularly called “Kashmiriyat”.
The Governor observed that centuries ago Kashmir witnessed intensive spiritual and philosophic debates among eminent religious scholars, historians, travellers and other important personages from Iran, Turkey, Central Asia, China and other countries making it a cradle which fostered the birth of invaluable spiritual philosophies and traditions which symbolise the rishi-sufi way of life. He said that the fact that the people of Kashmir are still devoted to the belief systems which emanate from the Rishi–Sufi traditions is evidenced by the admirable existence of a very large number of shrines in the valleyand elsewhere in the State which attract devotees not only from among the Hindus and Muslims but from all other communities, and from all over the country. These shared traditions have proven to be crucial for promoting lasting connectivities and close understandings across the communities.
The Governor observed that this symposium is being held at a time when, in the name of religion, the world is being torn apart by radical and fundamental ideologies; conflicts are taking place in many parts of the world; terrorist violence has emerged as an international phenomenon; the values of tolerance, communal harmony and brotherhood have been severely eroded and the world at large appears disinclined to resolve disagreements through peaceful means, civilised debates and discussions.
The Governor observed that the damage done to the heritage of coexistence and to the rishi-sufi traditions has severely fractured the fabric of our society and, today, we witness repeated incidents of terrorist violence in which dozens of innocent persons are getting killed. He said that if peace and normalcy is to be restored and humanity is to remain civilized, radical ideologies shall have to be denounced and collective efforts shall need to be made to revive the centuries old traditions of tolerance and brotherhood which transcend the barriers of religion, language, caste, colour and creed.
The Governor stressed strenuous efforts to revive the aesthetic orientation of the unique inter-religious debates and dialogues which laid the foundations of harmony and brotherhood in the times past and for resurrecting respect for the secular values encouraging plurality of faith and belief. He suggested that it would be fruitful if our Universities were to take appropriate initiatives for the students to get acquainted with the fundamentals of the Rishi-Sufi thought, the mystic love poetry of Rumi and the great Persian poet Hafiz who propagated universal brotherhood, love and compassion and revive the great traditions of aesthetics, culture, literature, music, dance, calligraphy, architecture, costumes and languages for which Kashmir was known in the centuries past.
The Governor observed that the revival of the erstwhile philosophic traditions and values would be also relevant and productive from the point of view of combating the serious problems which are already being caused by the fast progressing phenomenon of global warming and climate change. Among the many other virtues, the past value systems devoted high importance for respecting and protecting the natural environment. The rishis of the bygone era are remembered for planting trees alongside roads and walking tracks and digging wells so that weary travellers could rest a while under the shade of the trees, and drink waters.
The Governor hoped that the discussions in the symposium, in the next three days, will send out a clear message to revive the forgotten Rishi-Sufi creeds and traditions and for the obtaining environment of greed, selfishness and materialism being made to give way to shared beliefs of pluralism, communal harmony and brotherhood.
The Governor wished fruitful deliberations to the participants and trust that this symposium shall engender a significant outcome.
C. Rajesekhar, DG ICCR, Prof. Khurshid Iqbal Andrabi, VC, University of Kashmir, presented their views on “Rishi-Sufi Traditions of Kashmir”, on the occasion.
Ms. Kamna Prasad, Academic Co-ordinator, ICCR, New Delhi, gave introduction about the Symposium. Prof. G.N Khaki, Director, Centre of Central Asian Studies, KU presented the welcome address and Dr. Tareak A. Rather, Associate Professor Centre of Central Asian Studies gave the vote of thanks on the occasion.