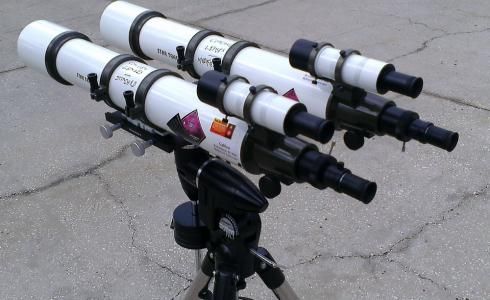 The first ever public viewing of the Santilli Telescope in Pinellas Science Center, St. Petersburg, Florida was attended by the members and leaders of St. Petersburg Astronomy Club, Florida’s oldest and most active astronomy organization. Also present in the audience were representatives from various local educational institutions, as well as members of the Florida media.

The talk began with club president Kyle Brinkman’s introduction of Dr. Santilli and his many contributions in amateur and professional astronomy. Dr. Santilli then conducted a presentation entitled “The Mystery of Antimatter,” a 45-minute explanation on antimatters’ long history of obscurity and unpredictability.

“By using a language understandable to the general public, Dr. Santilli outlined his fifty years of research toward the detection of antimatter galaxies, antimatter asteroids, and antimatter cosmic rays via the use of the Santilli Telescope, the first telescope in history with a concave lens, in pair with a traditional Galileo Telescope with convex lens,” Dr. William G. Gaines, President and Chief Operating Officer of TEC, recounted in a press release.

The audience also had the chance to take a look at antimatters’ verity through the photos shown by Kyle Brinkman and Dr. Santilli himself using the Santilli Telescope. The photos revealed an anomalous image that could not be explained, leading to a realization that additional testing was needed to get a better understanding of these phenomena.

“I was extremely pleased with the outcome of the first public presentation of our telescope. Judging from the discussion, I think the audience enjoyed it almost as much as I did. The thrill of discovery has always been the fuel that drives astronomers, and with our telescopes, that thrill may now be shared by many due to this telescope’s unique design,” Dr. Santilli said.

Dr. Santilli is now considered a living legend and a revolutionary figure in his own right. His decision to make his groundbreaking invention available both to professional and amateur scientists has somewhat helped abolish the wall dividing these two entities. The telescope is now available across the globe through a special distributorship model.

Ever since the telescope’s launch, several groups from the amateur and professional exploration sector have expressed their interest in the antimatter-detecting product. “Now, several optical labs are coming to us asking to build our telescopes,” Santilli said.

The invention of the Santilli Telescope has marked the end of an era when antimatters’ existence in space was highly difficult to understand and prove. The closest thing to disproving this claim that even modern greats such as Newton, Einstein, and telescope inventor Galileo supported was Paul Dirac’s Nobel-winning, eponymous equation. The Santilli Telescope is not only the first technology on the market capable of detecting antimatter particles and galaxies but also the first one to let humans see them with their own eyes.