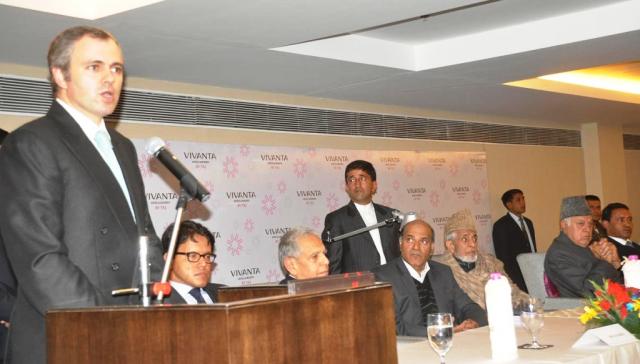 Srinagar, April 17 (Scoop News) –     J&K Chief Minister Omar Abdullah today while inaugurating Hotel Taj at Kral Sangri said, “Establishment of Hotel Taj at picturesque site shall positively set example for other premier chain group of international hotels so that they follow the line as situation in the valley of Kashmir is gradually improving and consequently providing apt  opportunities to the tourist industry to fill the tourism oriented space quickly”.

The Chief Minister said that it is an acknowledged fact that this Hotel construction of which was started two decades earlier could not be completed and made functional due to prevailing situation in valley but now it is functioning that too under the umbrella of Vivanta has proved that serious efforts are being made to strengthen the tourist infrastructure by private sectors as well. He said “I have seen that this hotel developing and bringing it to the standard of Taj Group quite some time now, today I am pleased that 80% of the locals have been taken by Taj Group. The youngsters have now opportunities not only to work in international standard hotels in the valley but can find opportunities in other parts of the world as well”.

. Omar said that tourism is the real economic potential of our State which received various setbacks but it has still great potential to slight down unemployment graph. He said I personally feel that establishing this hotel has heralded for better and peaceful times. He said valley has been lacking good hotels and requisite infrastructure which is now quickly been developed. . Omar said government has to work to provide facilities to all the entrepreneurs who come forward for the purpose. He said he has put in record of appreciation for Chairman JK Bank who has provided financial support for such ventures which are no doubt are risky in the back ground of last turmoil shall definitely yield good results in the shape of such tourism oriented master pieces.

Earlier Khwaja Saif-Ud-Din the owner of Saifco Hills welcomed the Chief Minister, . Omar Abdullah, Union Minister for New and Renewable Energy, Dr. Farooq Abdullah and other guests. He said the area has been made pollution and smoke free.

Later, the Union Minister, Dr. Faroooq Abdullah urged the need for promoting tourism in the state and appreciated the state government for initiating various measures in this behalf. He said he would peruse in the centre for increasing the flights between and Leh which would increase the tourist influx in the State. He asked Hoteliers and House Boat owner to improve management and sanitation.