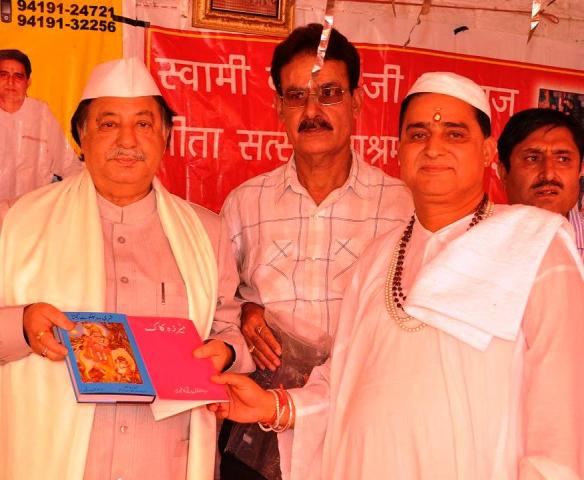 Jammu, April 27 (Scoop News) –  A Samohik Shardhanjali Sabha was organized today in the Swami Kumar Ji Geeta Satsang Ashram at Muthi-II to observe the 22nd Balidan Divas of Veteran Kashmiri Poet Amar Shaheed Sarwanand Kaul Premi and his son, Verinder, who were martyred by the terrorists in 1990 in Kashmir.

The Minister for Enterprises, Peerzada Mohammad Sayed was  the chief guest on the occasion.

The late Premi was a well known freedom-fighter and famous scholar.

Paying tributes to the great son of , Peerzada said the late poet enriched Kashmiri Language and Literature and promoted communal, amity through his writings.

Recalling his association with the late poet,  the Minister  said he was a student-friend of Late Premi and was highly influenced by the teachings of his teacher  and guide. The Minister praised and appreciated the multi-dimensional personality of Late Premi as Gandhian, an ace academician, author and writer. He further said that Late Premi had dedicated his entire life to the Welfare of common people, irrespective of caste, creed or religion.

On the occasion, Peerzada was felicitated with a Shawl and   presented a set of books of Late Sh. Premi.

Welcoming the guests, Swami Kumar Ji   threw light on life and teachings of Late Premi who had a great contribution in the Kashmiri ethos and history by translating Bhagvat Gita and Ramayana and also recalled his memories.

He started his carrier with ‘All India Spinners Association’ started by Mahatma Gandhi, got influenced by the Gandhian Philosophy and got involved with freedom movement. He remained underground and took part in Quit-India and Quit Kashmir movement. Shri Premi ceaselessly worked and profusely wrote for communal harmony and universal brother-hood.

The leaders of various displaced Kashmir Pandit Organisations also paid rich tributes to the Late Premi and remembered his contributions   in social transformation.

Dr. Agnishekhar in his speech highlighted the social, cultural and literary works of Late Premi and paid glowing tributes for his long service for social up-liftment, communal amity and borther-hood.

Sh. Moti Lal Keemu was felicitated by the community for being bestowed National Award “Padam Shree” for 2011-2012. He was given a Shawl and a set of books authored by Late Sarwanand Koul Premi.  Keemu recalled his contribution to language and literature and also lauded the role of Late Premi in Cultural and Literary reminiscence of Modern Kashmir.

Prof. P. N. Trisal also recalled that many of his writings focused on the need for promoting and preserving old age bonds of brother-hood among different communities in the country.

As a mark of respect speakers pledged to keep his message of peace friendship and religious tolerance going on. Rajinder Premi, the son of Late Premi along with other family members was also present on this occasion.

Vote of Thanks was passed on behalf of the Ashram by Sh. P. K. Raina.