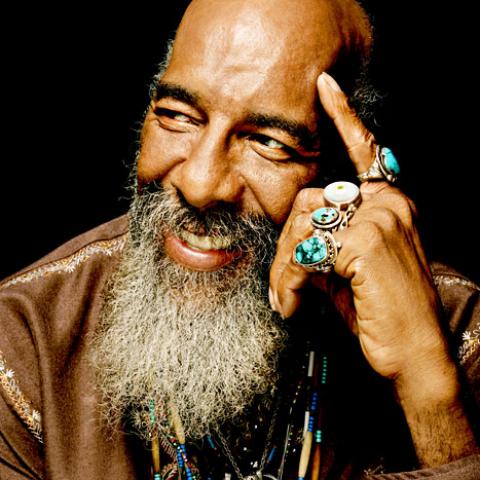 I take many small walks on my road, for six minutes, seven minutes. On one of them, on Tuesday, April 23, I found a page from the Daily Freeman (of Kingston, NY) with the headline:

A small photo showed Richie laughing. He looked like me, with a long white beard. Beneath the photo was written "Havens." This man was perfectly well-named.

Havens’ most famous song, "Freedom," was invented on stage at the Woodstock Festival because he ran out of other songs. Richie was the first performer, but the next few bands were stuck in traffic. (Remember, Arlo Guthrie famously announcing: "The New York State Thruway is closed!"?) I didn’t know that Havens performed at Bill Clinton’s 1993 inauguration, or was the eldest of nine children.

The article didn’t mention Richie Havens’ lack of teeth. His distinctive sound included a lisp. According to USA Today, Havens eventually got dental implants, partly due to encouragement from Johnny Carson. Www.chacha.com says that Richie lost his teeth "through poor treatment of them before Woodstock."

Unlike other old hippies, I actually listen to Richie Havens. Through a complex miracle, I still have the record album Mixed Bag, which I bought new in 1969. Every so often, I put on "Follow" and feel illuminated:

Climb to the treetops, child, if you’re able.

Let your hands tie a knot across the table.

Come and touch the things you cannot feel.

Richie Havens could transform any song into a blessing.