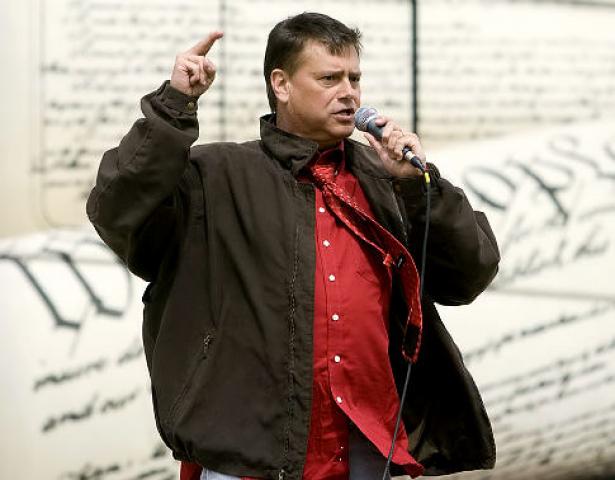 Originally published in The Daily Censored for Project Censored.

Back in August, 2009, I published a small article titled "Goons With Guns" that linked to a memo from a Right-Wing Tea Party organization called Right Principles. The memo called for their supporters to disrupt and harass those that showed up to town hall meetings in support of health care reform. Here is a small excerpt from the memo, "… pack the hall… spread out … rock-the-boat early in the Rep’s presentation…to yell out and challenge the Rep’s statements early….yell back and have someone else follow-up with a shout-out … to rattle him, get him off his prepared script and agenda…stand up and shout and sit right back down." The memo brags about how 30 protesters disrupted a town hall meeting with 150 people.


As a result, the debate over the health care bill heated up. Unions that planned on showing up to town hall meetings started receiving  death threats from the angry Tea Party supporters. At the AFL-CIO office, an official described what he called a, "pretty direct threat" after the organization announced it was planning to attend an upcoming Democrat held town hall meetings. The message said, "I will be going to a local town hall this weekend, all you union members BEWARE!" an emailer wrote at 9:40 Saturday morning. "We will be waiting for you. Better make sure you have arrangements with your local ER. Today is the day when the goon meets the gun. See you there."

Once again, the corporatists Tea Party thugs are up to their old tricks of intimidation, disruption, and disinformation. Yesterday, The Political Carnival revealed a memo from Tea Party Express leader, and racist Right-Wing radio talk show personality, Mark Williams. In the memo, Williams is encouraging his Tea Bagging buddies to act as impostors and provocateurs in order to disrupt and discredit the union supporters.  Here is the body of the memo, highlighted by The Political Carnival:

“(1) I signed up as an organizer (2) with any luck they will contact me and I will have an “in”  (3) in or not I will be there and am asking as many other people as can get there to come with, all of us in SEIU shirts (those who don’t have them we can possibly buy some from vendors likely to be there)  (4) we are going to target the many TV cameras and reporters looking for comments from the members there  (5) we will approach the cameras to make good pictures… signs under our shirts that say things like “screw the taxpayer!”  and “you OWE me!” to be pulled out for the camera (timing is important because the signs will be taken away from us) (6) we will echo those slogans in angry sounding tones to the cameras and the reporters.  (7) if I do get the ‘in’ I am going to do my darnedest to get podium access and take the mic to do that rant from there…with any luck and if I can manage the moments to build up to it, I can probably get a cheer out of the crowd for something extreme.”

The memo goes on:

“Our goal is to make the gathering look as greedy and goonish as we know that it is, ding their credibility with the media and exploit the lazy reporters who just want dramatic shots and outrageous quotes for headlines.  Even if it becomes known that we are plants the quotes and pictures will linger as defacto truth.”

Mark Williams’ goals are clear. While Williams claims he does not want to instigate violence. However, he believes his provocative actions might help expose the union supporters as goonish, thus dinging their credibility. This is the classic act of a provocateur.

Thus far, the protests in Wisconsin have been overwhelmingly peaceful . Yesterday, over 70,000 supporters of the union’s right to collectively bargain were out in force. Along with a hundred or so proponents of the Right-wing corporatocracy to peacefully counter demonstrate. As a result, Wisconsin proudly showed the world what the First Amendment looks like.

However, as the protesters build momentum, the opposition will become more desperate. What we are seeing in the repugnant thugs that follow Mark Williams is an overt plan to ramp up the rhetoric and provoke a confrontation. Once again, we witness the Right-wing use the dishonorable tactic of falsely setting up their opponents in order to discredit them. It is a shameful tactic, but one the supporters of the corporatocracy commonly use. With the Right-wing plotting to disrupt the peaceful protesters this week, we should not be surprised if things get ugly. The supporters of the middle class and worker’s rights must remain calm. They must not walk into the traps the Right-wing extremists are now setting.