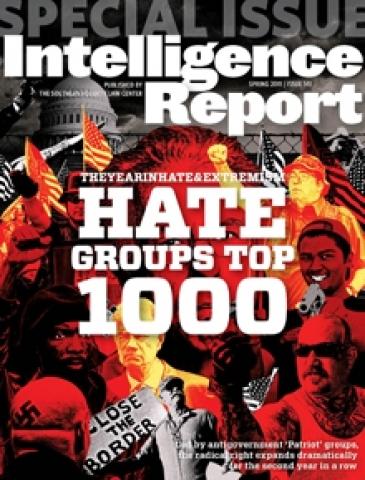 Yesterday, the Southern Poverty Law Center (SPLC) released their spring 2011, Intelligence Report. Since the 80’s, SPLC began counting hate groups. For the first time, the organization has counted over 1000 hate groups, up from 932 in 2009. Since 2000, there has been a 66% increase in hate groups. According to the SPLC, “All hate groups have beliefs or practices that attack or malign an entire class of people, typically for their immutable characteristics.”  The report points out, that just because an organization is on the “Hate Group” list, doesn’t imply the group advocates violence or criminal activities.

Once again, SPLC has linked the dramatic rise in Right-wing extremism with the increase in political violence across the country. Here is an extended excerpt from the report:

“In an 11-day period this January, a neo-Nazi was arrested headed for the Arizona border with a dozen homemade grenades; a terrorist bomb attack on a Martin Luther King Jr. Day parade in Spokane, Wash., was averted after police dismantled a sophisticated anti-personnel weapon; and a man who officials said had a long history of antigovernment activities was arrested outside a packed mosque in Dearborn, Mich., and charged with possessing explosives with unlawful intent. That’s in addition, the same month, to the shooting of U.S. Rep. Gabrielle Giffords in Arizona, an attack that left six dead and may have had a political dimension.

It’s also clear that other kinds of radical activity are on the rise. Since the murder last May 20 of two West Memphis, Ark., police officers by two members of the so-called “sovereign citizens” movement, police from around the country have contacted the Southern Poverty Law Center (SPLC) to report what one detective in Kentucky described as a “dramatic increase” in sovereign activity. Sovereign citizens, who, like militias, are part of the larger Patriot movement, believe that the federal government has no right to tax or regulate them and, as a result, often come into conflict with police and tax authorities.”

The SPLC report includes a “Hate Map” of America where you can clink on each state and see the entire list and locations of the 1002 hate groups counted in the SPLC report. Interestingly, along with the usual hate groups like the Ku Klux Klan, Aryan nation, holocaust deniers, and the Nation of Islam, the SPLC includes a few Christian “anti-gay” organizations, including the Family Research Council and the Traditional Values Coalition.

SPLC’s inclusion of ant-gay organizations has not set well with some on the Christian right. The radical Right claims the SPLC’s listings are just another example of a liberal smear. Yet, the SPLC makes it clear that these few Christian Right-wing organizations end up on the hate list because of their involvement in dark campaigns of lies, smears and general hateful language. Here is how the SPLC says a Christian Right, anti-gay group ends up on their hate group list:

“The religious right in America has employed a variety of strategies in its efforts to beat back the increasingly confident gay rights movement. One of those has been defamation. Many of its leaders have engaged in the crudest type of name-calling, describing LGBT people as "perverts" with "filthy habits" who seek to snatch the children of straight parents and "convert" them to gay sex. They have disseminated disparaging "facts" about gays that are simply untrue — assertions that are remarkably reminiscent of the way white intellectuals and scientists once wrote about the "bestial" black man and his supposedly threatening sexuality.”

Yep, while I’m not a lawyer, it does appear some Christian Right-wingers like Focus on the Family and the Family Research Council have engaged in the same kind of defamation once used to disparage black men. Anti-gay bashing is a form of bigotry. The SPLC is right to include the radical Christian organizations into their list.

Looking at the graphs in the “Intelligence Report”, it would be nice to see a national map of the Right-wing nativist, anti-government Patriot, and militia groups. Nonetheless, the report shows that Right-wing extremists groups have grown in America by 22 percent. This is an alarming number and something all Americans should consider. The American Right-wing needs to look deep within and ask, “Why are Right-wing hate groups on the rise?”

Filed under: Opinion, Politics
Share Tweet Pin G Plus Email
previous article: Thousands of OFWs stranded in Libya
next article: hotel Royal Plaza is treats to the guest coming to Ibiza and that is why these hotels have high rang