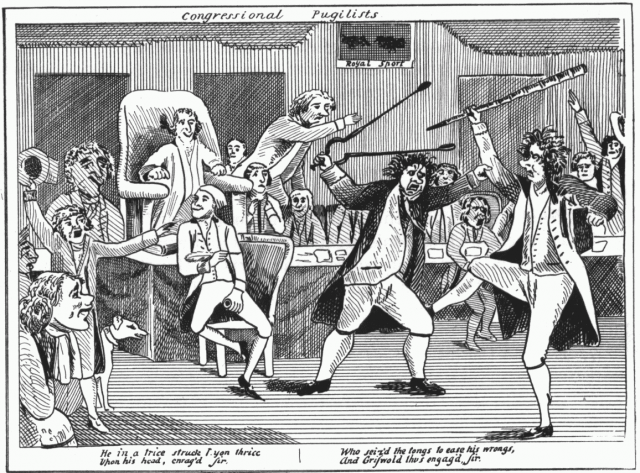 (Originally published for Project Censored at the Daily Censored).

When it comes to state’s rights and the environment, the Right-wing is all over the board on this issue. Two recent events illustrate this point, this month’s Supreme Court American Electric Power Company v. Connecticut decision and the Republican proposed bill HR 2018.

“American Electric Power Company v. Connecticut (the “greenhouse gasses” case) has been widely reported as an affirmation of the powers of the Environmental Protection Agency (EPA). And it is—but not in the way most Americans would assume when hearing that phrase. It’s a bit surprising that the “liberal media”, presumably in favor of environmental protections, isn’t telling it like it is on this one.

In other words, what the Supreme Court did in the AEPC v. Connecticut case was limit a state’s right to enact laws that would require stricter air quality standards than the EPA requires. I wondered why the Right-wing Supreme Court and so many Right-wing think-tanks would support limiting state’s rights to write laws that would protect the health and the environment of their own citizens. After all, isn’t the Right-wing supposed to be “Federalists”, or shall I say Federalist Society champions of state’s rights and limited federal government?

A look at the amicus petition by the Cato Institute in the AEPC v. Connecticut case makes it clear why the Right-wing believes the federal government should trump the states when it comes to the Clean Air Act. Here is an excerpt from their amicus petition:

“Cato is concerned that allowing courts to determine policy issues–instead of legal ones—would dramatically expand the role of the federal courts, relieving the legislative and executive branches of political accountability for sweeping changes to national economic and social policy.”

You see, the Right-wing was concerned if states like my California, (where I live), were to require higher air quality standards than those put out by the EPA (which California has done), then the states and individuals would have the right to sue businesses and individuals that were violating the stricter California standards. The Right-wing argued that a state by state patch-work of higher air quality standards would just tie up the courts and lead to federal courts essentially legislating the from bench.

As a result of the recent Supreme Court decision, Sanders concludes, “In short, since the EPA was granted the power to address a problem, no one else is allowed to address it…even if the EPA doesn’t do so. The Clean Air Act, then, has effectively prevented any kind of regulation of carbon dioxide emissions in the United States or any segment thereof, unless and until the EPA decides to act on its authority.”

However, when it comes to the Federal Water Pollution Control Act, the Right-wing has taken on an entirely different approach. The Right-wings plans are to strip away by amendment to the Act the EPA’s authority to regulate water and hand that job over to the states. Is this just another example of Right-wing hypocrisy? Yes and no. Yes if you are an organization like the Cato Institute that usually advocates for state rights and limited federal government. No, if your guiding purpose is to ensuring the least amount of environmental protections possible in the U.S. Essentially, abandoning Federalism for Laissez-Faire capitalism. And who said the Right-wing hates the French?

On June 22, 2011, the House Transportation and Infrastructure Committee passed the Clean Water Cooperative Federalism Act, HR 2018. The bill was moved forward by many Republicans in the U.S. House of Representatives. The Bill’s stated purpose is to “To amend the Federal Water Pollution Control Act (Clean Water Act) to preserve the authority of each State to make determinations relating to the State’s water quality standards, and for other purposes.”

According to HR 2018, the federal government, including the EPA, “may not withdraw approval (or object) to a State program” regarding “the implementation of any water quality standard that has been adopted by the State.” The bill further states the EPA will have no authority in “the implementation of any Federal guidance that directs the interpretation of the State’s water quality standards.”

While the Right-wing was secretly rejoicing over the recent Supreme Court ruling prohibiting the state’s the right to regulate air quality, they were working to strip away the federal government’s right to regulate water quality. That is because the federal water quality standards have worked and have shown to have dramatically helped clean up our nation’s waters. Now, many states would like to ease-up on those standards. Predictably, once again we see the Right-wing now calling on their Federalist friends to help gut the EPA’s authority to establish national clean water standards.

When one looks at the two examples provided in this article, the AEPC v. Connecticut Supreme Court ruling and the Republican sponsored HR 2018 bill, which environmentalist call the Dirty Water Act, what you see is a Right-wing movement in the U.S. that is all about high jinks or hypocrisy. We see a Republican Party that cares more about placating their corporate financiers than the environment, the public’s health, or their proclaimed belief in Federalism. If your sole interest is to protect corporations from lawsuits and regulations that prohibit them from polluting, then the Right-wing strategy has been all about high jinks, and therefore not hypocritical. However, if the Right-wing really believed in what they say, they would either oppose the Supreme Court decision or oppose HR 2018. Yet, they have unequivocally supported both.

In the mean time, HR 2018 has been fast-tracked from congressional committee. The Right-wing is now pushing to “suspend the rules” and let the bill go up for a vote without a debate. This week, after the 4th of July holiday, the Right-wing plans on forcing HR 2018 to a up or down vote. If the Democrats let this happen without a debate they are idiots. And of course, we all know the Democrats of often idiots.

If you are interested in helping stop the Right-wing from fast-tracking HR 2018, The Dirty Water Bill, check out this email petition from the Sierra Club. Write to your congress member and ask them to oppose HR 2018.

Filed under: Opinion, US
Share Tweet Pin G Plus Email
previous article: Are They “Rebels” or Are They “The People”? What American Colonists Would Say If Still Around
next article: Three Pears