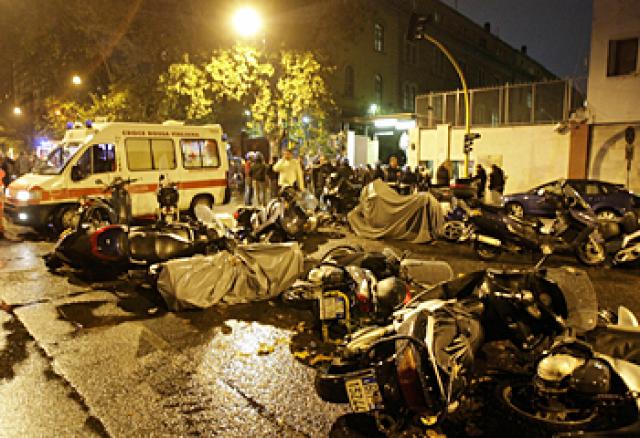 ENRAGED soccer fans rioted in parts of Italy yesterday after a policeman shot dead a fan while trying to break up a scuffle between supporters of rival clubs.

In Rome a group of about 200 people, some wielding rocks and clubs, attacked a police barracks, setting cars on fire and smashing the building’s windows.

Three top league matches had earlier been called off after a policeman killed a 26-year-old man during a spat between supporters of Rome club Lazio and Turin‘s Juventus at a motorway rest stop near the Tuscan city of Arezzo.

In Milan, Lazio fans threw rocks at a police station in protest at the shooting and marched towards the city centre shouting "Assassins!" at security forces, although the protest subsided in the evening.

Police said the shooting was accidental.

"It was a tragic error," the police chief in Arezzo, Vincenzo Giacobbe, said in a statement. "Our agent intervened to prevent the scuffles between two small groups of people … from degenerating," he said.

"I express my deep grief and sincere condolences to the family of the victim."

He later said the policeman had fired two shots, one of which fatally wounded in the neck Gabriele Sandri, a disc jockey from Rome who was in a car of Lazio fans.

"They killed my brother," Cristiano Sandri shouted at reporters at the police station in Arezzo.

As news of the death spread among supporters gathering at stadiums across Italy, the national football league postponed Lazio’s match with champions Inter Milan, due to kick off at 1am (AEDT).

In the northern city of Bergamo, Atalanta’s match with AC Milan was abandoned after supporters tried to smash down a glass barrier keeping them from the pitch.

Italian Prime Minister Romano Prodi called the violence "very worrying" and said he had asked for a full probe on the circumstances of the Arezzo shooting.

Italy is battling a serious soccer hooligan problem and suspended all soccer for a period in February when a policeman was killed in riots outside a top-flight match in Catania.

Sporadic violence has continued in recent months despite the security crackdown prompted by February’s incident, which was a contributory factor in Italy being beaten by Ukraine and Poland in the race to stage the Euro 2012 soccer championship.