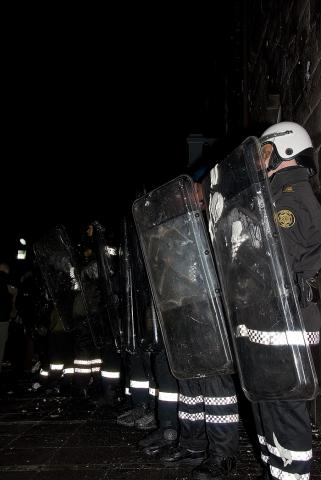 Since the Icelandic financial and economy meltdown about 100 days ago the public in Iceland has been increasingly disappointed and angry.  The government of Iceland has done next to nothing to help the families in the country which are battling with price-index based mortages which have skyrocketed because of high inflation caused by the fall of the Icelandic krona (ISK) of more than 100% against the dollar and the euro.

People has been protesting the corrupted and incompetend government and government institutions for 16 weeks now but still not a single person has resigned from their positions.  The people who got Iceland in this mess are still in power!

This week we made a good milestone when the biggest member group of one of the government parties, Samfylking,  agreed to put to end their government partnership with Sjálfstæðisflokkur and hold elections this spring.  However, the chairman of Samfylking hasn’t give the green light yet.

To complicate the mess in the Icelandic political scene both chairmen of the government parties are seriously ill.  The prime minister announced yesterday (23. january) that he has a cancer and will need to be treated abroad.  The foreign minister have been battling with brain tumour since in December.

The PM announced also that he wants to hold elections 9th of May but for the public something needs to change now.  So the protests will go on and won’t stop until people in power has resigned and some put to jail.

For more video’s please check out my youtube channel