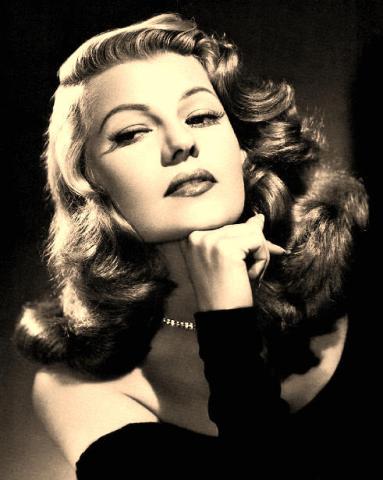 Margarita Carmen Cansino, a girl known to the world as Rita Hayworth, was one of the most glamorous actresses in cinema history. But… she was much more than a beautiful face. Circle touches the various touched and untouched facets of the life of this Hollywood Diva…

Rita Hayworth was a much better actress than the critics ever acknowledged. Who can ever forget her steamy portrayal of Gilda? It is a credit to her abilities that she was able to play characters like Gilda and Miss Sadie Thompson so flawlessly that the world thought of the person and the image as one in the same.   An exceptionally talented dancer, Rita’s performances embodied a combination of strength and sensitivity that set her apart from other screen sirens, and made her just as popular with female audiences. Rita brightened America during World War II with her dancing in musicals like Cover Girl, and displayed her evolving acting talents in films like The Loves of Carmen and Miss Sadie Thompson. Starring in movies for nearly four decades, she became one of the all-time great Hollywood legends.

Spanish dancer Eduardo Cansino’s daughter Margarita was trained as a dancer from early childhood. Her mature looks got her into Eduardo’s stage act at the age of 12. Her Fox contract was dropped after 5 small roles, but expert, exploitative promotion by her first husband Edward Judson soon brought Rita a new contract at Columbia, where studio head Harry Cohn (I) changed her name to Hayworth and approved raising her hairline by electrolysis. After 13 mainly minor roles, Columbia lent her to Warner Brothers for her first big success, The Strawberry Blonde in 1941; her splendid dancing with Astaire in You’ll Never Get Rich (1941) made her a star. After several ups and downs, the lady finally got what she truly deserved — The Love Goddess.

The desire of many, queen of none

From her persona, it is hard to believe that the real Rita was a very shy woman with great insecurities. Yearning for true love all her life, Rita had five marriages and five divorces: first to Edward C. Judson (1937-1943), followed by actor–director Orson Welles (1943-1948, one daughter Rebecca Welles), to Prince Aly Khan (1949-1953, one daughter Princess Yasmin Aga Khan), then to actor–singer Dick Haymes (1953-1955), and finally to director James Hill (1958-1961). It is said that because of the physical and sexual abuse she endured from her father during her childhood, Rita had difficult relationships with men her whole life. As commented her second ex-husband, Orson Welles, “If this was happiness, imagine what the rest of her life had been. Only when the cameras rolled did she turn on the explosive sexual charisma that in Gilda (1946) made her a superstar.” To Rita, domestic bliss was truly important. , if elusive, goal, and in 1949 she interrupted her career for marriage, unhappy almost from the start, to playboy Prince Aly Khan. Her films after divorce from Aly include perhaps her best straight acting performances, Miss Sadie Thompson (1953) and They Came to Cordura (1959). From 1960 (age 42), early onset of Alzheimer’s disease (undiagnosed until 1980) limited Rita’s powers; the last few roles in her 60-film career were increasingly small. Almost helpless by 1981, Rita was cared for by daughter Yasmin until her death at age 68.

¥     Some legends claim that the Margarita cocktail was named after her when she was dancing under her real name in a Tijuana, Mexico nightclub.

¥     Rita’s first (uncredited) appearance in a film was with the dancing Cansino family in a Vitaphone short La Fiesta (1926).

¥     Rita appeared 5 times on the cover of Life Magazine.

¥     Rita’s own singing voice is heard in the introductions to her songs (otherwise dubbed by Jo Ann Greer) in Pal Joey (1957).

¥     Rita Hayworth played the sister of Barbara Stanwyck in A Message to Garcia (1936), but after a test screening all her scenes were cut at the request of Darryl F. Zanuck.

Journey down the hair

From jet black hair, pulled into a bun to flowing red locks, Rita Hayworth’s hair was her trademark.

·         In the beginning of her career under the name of Rita Cansino, she sported a jet black slicked into a bun do.

·         During 1939 until the early part of 1940, already "Rita Hayworth", her hair was still dark, but styled down and split in the middle to copy the Hedy Lamarr look which many starlets adopted at the time. She "premiered" this style in Only Angels Have Wings.

·         The finishing touch in the transformation from Cansino to Hayworth, was when Rita’s hair was dyed to it’s signature ravishing red color. She dyed her brunette locks red for the title role in The Strawberry Blonde.

·         Rita traveled back in time to achieve the turn-of-the-century coif from My Gal Sal and Gilda.

·         For just one movie, The Lady From Shanghai, under the guidance of her former husband, Orson Welles, Rita’s hair was cropped short and dyed a shade known as "topaz blonde."

·         “The best thing about Rita Hayworth was that every role she played seemed to have been written personally for her. The cine-world has had very few fine actresses.” – Mahesh Bhatt, filmmaker

·         “Rita Hayworth was not an actress, she was an instate of acting and dancing” – Arshad Warsi, actor

Filed under: Lifestyle, Opinion
Share Tweet Pin G Plus Email
previous article: Why You Should Stay Away from Tanning Salons
next article: “Elderly Left behind by Tech Revolution :A Digital Divide !!”