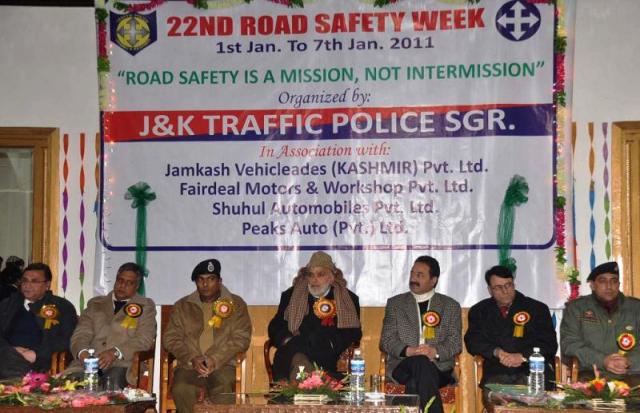 Jammu/Srinagar,Doda/Udhampur, January 01(Scoop News) – To create awareness among the masses particularly among the driving community regarding safe and secure driving habits,Road Safety Week was observed today in Jammu and Kashmir state.

The function was organized by the Motor Vehicle Department in collaboration with traffic police at Mini Stadium here. The theme of the programme is “Road Safety is a not an Intermission”.

To observe the week various events including symposiums, debates, painting competitions will be held to create awareness among public. Separate camps for drivers and cleaners will also be organized to sensitize them about safety measures.

The participants of the rally were carrying placards depicting messages for safety of human life. It passed through Shalimar Chowk, Indira Chowk, Gumat, Vinayak Bazar and concluded at M.A.M Stadium.

In his inaugural address,  Akhoon urged upon the young generation to observe properly the traffic rules while driving and save the precious lives. He asked them to educate their families as well as neighbours about traffic rules to avoid accidents. He appealed the people to cooperate with the law enforcement agencies in the implementation of road safety rules.

For regulation of smooth traffic, the Minister highlighted measure initiated by the government. He said setting up Unified Metropolitan Transport Authority  (UMTA) is under consideration of the government and for the purpose a committee under the Chairmanship of  Chief Secretary has already been constituted.

Speaking on the occasion, Director General of Police,  Kuldip Khoda said that traffic rules will be got strictly implemented in future for the safety of commuters as well as drivers. He said CTV sets are being installed at vital places to regulate traffic in a systematic way and also keep surveillance over violators of traffic rules.

Commissioner/Secretary Transport & CA&PD,  Pardeep Gupta, Transport Commissioner, Dr. Syed Fazalullah and IGP Traffic,  H.K. Lohia also stressed for safe driving and said everybody has to abide by the traffic rules to avoid road mishaps. They emphasized the need for creating more and more awareness among the people particularly driver community.

In Srinagar Minister for Rural Development, Panchayats, Law and Parliamentary Affairs,  Ali Mohammad Sagar has appealed the people to extend their full cooperation to the administration including Traffic department in making the valley accident free. He said the safety of human lives should be our first and foremost duty.

Sagar appealed the transporters to desist from observing strikes and hartals as it poses tremendous inconvenience to the people while on the other hand transporters themselves also reel under losses.

The IGP, ,  S. M. Sahai who was also present on the occasion appealed the people who drive vehicles to strictly abide by the traffic rules and avoid rash driving.

To avoid traffic pressure in the city, the Deputy Commissioner, ,  Meraj Ahmad Kakroo said that alternative road arrangements are underway for providing better transport facility to the people. He said that 75 buses have been purchased by the government for Road Transport Corporation for the convenience of the commuters.

The RTO Kashmir,  Anees Hamdani while welcoming the Minister and other guests assured that awareness camps regarding traffic rules would be conducted across the valley.

In Udhampur the officers and officials of Motor Vehicle Department (MVD) Udhampur unit, today started a massive awareness campaign to educate the people about their responsibilities to minimize the road accidents and for the smooth traffic flow.

Inspectors MVD Udhampur,  Kuldeep and  Rajesh assisted by NCC cadets under the supervision of Assistant Regional Transport Officer(ARTO), Udhampur, S. Swarn Singh were seen busy in educating the citizens at different chowks of Udhampur town regarding various do’s and don’ts of road safety.

According to ARTO Udhampur the theme for the year 2011 Road Safety Weak is “Road Safety a , not intermission”. He further apprised that during the weak a comprehensive public awareness campaign on road safety would be extended to different part of the district.