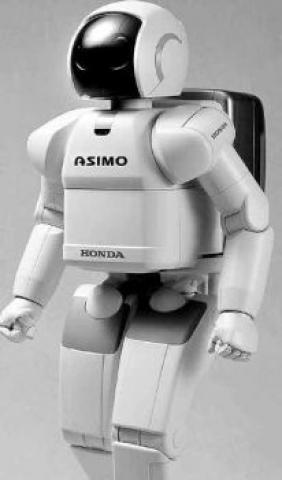 Japan’s Honda motor company has taken its humanoid ASIMO (Advanced Step in Innovative MObility) on a global tour, climbing stairs, dancing, shaking the hand of world leaders and delighting kids in dozens of countries including India.

And competitor Toyota has created three different types of `partner’ robots, aimed at making life easy for humans: a walking type, a rolling type and a mountable version.

All three types are being showcased at the ongoing Expo 2005, at Aichi, Japan that goes on till September. Mitsubishi Heavy Industries has its own demo model there: `Wakamaru,’ which interacts with people via WIFi and voice, and serves as a home companion for children and the aged.

It can walk around the house, respond to voice commands, sing — and when the owners are away, its digicam (in the left eye) is wide open to monitor the home. You can call Nuvo by mobile phone and check on the home — through his all-seeing eye. In the U.S., one can buy `Roomba,’ the intelligent floor cleaning vacuum robot from IRobot for around $ 250, while versions of the Sony `Aibo’ robotic toy will set you back around $ 1,200.

In recent weeks, robots have made news as agents for complicated surgery. The only robotic surgical machine cleared by the (U.S.) Food and Drug Administration (FDA) is the Da Vinci system and it has been used routinely for many minimally invasive procedures like gall bladder repair or kidney donation.

Earlier this month, for the first time, a complex liver surgery was performed for the first time on a patient at the University of Maryland Medical Centre in Chicago, using a laparoscope and a pair of Da Vinci robotic arms.

Indeed the day of unattended surgery may not be more than a decade away. The U.S. Defence Advanced Research Projects Agency has sanctioned a $ 12 million project with a consortium of American companies and universities to develop within 2 years the prototype of a battlefield surgery robot.

If successful, such robots will be placed in unmanned `trauma pods’ on the frontline and surgeons far from the battlefield will be able to `operate’ on emergency cases.

The military establishment has always been a keen student (and funder) of robotics. Robot bomb sniffers, unmanned nuclear and biological containment devices are widely used in many armies.

Ironically, the same company which makes the household vacuuming robot has recently delivered on a military contract that attracted some controversy: It has developed a battlefield robot named Packbot, that fires a pump action shotgun that is currently said to be undergoing trials with a U.S. infantry regiment in Georgia.

The visions of a Robocop-type robot soldier may not become reality in the near future — but it is worth remembering that technologies like robotics could turn out to be double edged swords — and not all potential applications may be of the cuddly toy kind.

In India, military robotics has been the preserve of a few institutions like the DRDO’s Bangalore-based Centre for Artificial Intelligence and Robotics (CAIR) and till date at least one has not seen any civilian spin off.

The Indian Institute of Information Technology (IIIT), Hyderabad, also boasts a robotics lab which thanks to its partnership with Carnegie Mellon University West (CMU-West) is actively engaged in bring to fruition a low cost 4-wheeled mobile robot with stereo vision, called Max.

It may be some time before this becomes something you can buy; but what is unstoppable is the steady pace of development in the science of man-machine interfaces, and if it is accompanied by a fall in prices, there is no reason why humanoids should not be the key appliances of this century.

Already, observers say robotics is poised where personal computers were, 30 years ago: when the `killer app.’ for the mass market comes, it will open the floodgates to any number of humanoid helpers around the home and outside.

And not just on the ground. Last year, Epson, better known for its printers, developed what it called the `world’s smallest and lightest micro-flying robot, weighing just 12 gms with a flying time of 3 minutes.

So what do you do with your personal flying robot? You may not know just yet — but trust science ( and a growing robotics industry) to come up with a compelling application any day now!