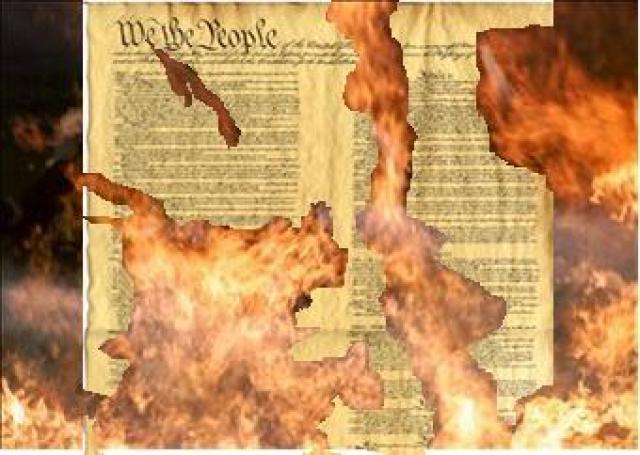 For Any And All U.S. Constitutional Conserve-atives:

It was reported in the mainstream media today that a U.S. District Court Judge in New York has thrown out a case challenging the provisions of the Bush’s Administration’s Unpatriot Act with respect to FISA wiretaps on U.S. citizens conversations involving foreign calls to non-U.S. citizens.

The judge, ruling by the seat of his pants instead of the U.S. Constitution undisputedly, indicated that the plaintiffs in the case, several U.S. groups involved in foreign human rights issues such as Amnesty International and other various groups, did not demonstrate that they were clearly subject to the FISA provisions.

The provisions of the Act clearly indicate that any calls to any foreign entities outside the United States could be monitored by U.S. intelligence without the issuance of a warrrant based on clear probable cause contrary to the express provisions of the Bill of Rights with respect to unlawful searches and seizures.

Of course, governmental officials and the Obama Administration also which does have the power to bring that "Act" within Constitutional provision after Bush’s and that Congress’s treason, have continue to defend these clear Constitutional violations, including the last Congress and this one, on the grounds that due to the nature of our national security concerns and terrorism now throughout the world, such measures are needed and necessary.

Although, of course, with technology the way it also is in this day and age, a valid warrant can be issued by any federal or state judicial official within literally minutes rather than the days and hours such a measure took when the founders wrote that provision into the Constitution in order to protect the people from governmental overstep and abuse.

At this point this just goes to reaffirm, we have a rogue federal government now operating in each and every branch.

The court ignored the actual wording in the Constitution, and did so without compunction.

And appears the ACLU must have only been involved in order to collect their taxpayer paid fee for their services in prosecuting or defending for any and all civil rights violations.  They were, of course, nowhere to be found when this legislation was sped through Congress in the wake of 9/11.

And a spokeman for that organization indicated that this action by the federal judge "just might close the door on judicial review of any future actions," without so much as pointing out the obvious.  The judge was clearly politically determining this case.  Not determining it according to the actual Rule of Law that still exists in this country, until the PEOPLE so rescind or amend it.

I wonder how much the legal fees were for this sham of a legal proceeding,  America, because you paid for it.

And interestingly also, it is Silicon Valley that is profiting the most from both the war in Iraq in their government contracts, and all those provisions in the FISA legislation for also their government contracts for the gadgets needed to conduct this domestic spying program.  And Congress then had the audicity to attempt to legislate whether or not the American people then who had been victimized by this unlawful and unconstitutional legislation could then sue for damages incurred for their wiretapping and evesdropping.

When the common law provides that anyone that violates any other American citizens rights to "life, liberty and property" can and should be held accountable under our civil and criminal laws for any and all damages so inflicted as a result of any personal or corporate violation of those "unalieanble" rights.

The arrogance of our government now in all three branches knowns no bounds, nor is it now at all responsive to the people or recognizes its lawful place as subservient to them, and not the other way around.

So just when did the British actually win this war, without a single shot being fired?

As they say, it is much easier to conquer a nation from within, than from without, and for a clue look to 1913 because it appears Wilson’s prediction after that critical year is "spot on," to use the British venacular.

They haven’t come, they’re here, America.  Sitting on the Hill, in now even your state offices, and in the courtrooms.  So be warned.