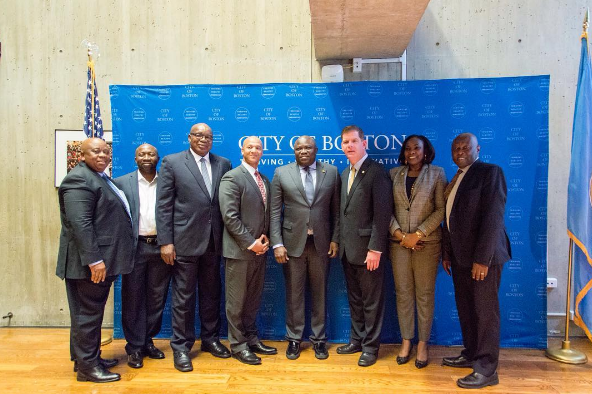 The recent approval  of  handing over state presidential lodge of Lagos, by  President Muhammadu Buhari, has major role of Governor Ambode, who had requested the president several times. The presidential lodge would be turned into a heritage site, research facility and tourist centre under the patronship of Governor Ambode. The lodge, located at Marina, would be open for local and international visitors, as stated by Governor Ambode. As a turning point for Lagos state development, the main aim of Mr. Ambode is to turn the Marina-Onikan axis, into world class tourist destination. In a recent instagram post, Mr. Ambode wrote, “our Government is set to transform the Marina-Onikan axis into a world-class arts, culture and tourism hub that Lagosians and Nigerians will be proud of”. His decision was praised by all sections of population in Nigeria.

As part of this decision,the governor of Lagos state, Mr. Ambode has planned to construct a skywalk, that will be connecting Marina directly to broad street, where freedom park is located. The governor stated that this skywalk would provide the ultimate access to view the cultural arcade emerging between Broad street and Marina. The Governor wants to make lagos the hub of arts and tourism in Africa.

In addition to the decision of turning presidential lodge into a tourist hub and heritage center, Mr. Ambode has also initiated other development plans for Lagos state. Mr. Ambode is planning to use Boston model for strategic cleaning of waterways and to curb other environmental issues. In a post, on his Facebook page, Mr. Ambode wrote, “At a meeting with the Mayor of Boston, Marty Walsh, at the Boston City Hall; our government will adopt the Boston model to clean up Waterways and tackle other environmental issues with the use of technological innovations.”

Mr. Ambode has stated in a recent meeting with Boston state officials, that Lagos is the heart of investment avenues available in Nigeria. Mr. Governor in recent announcement, stated his development plans for Lagos, undergoing in collaboration with MIT Africa initiative in Cambridge and Boston. He insisted on harnessing the innovation and technology of MIT to the challenges faced by the lagos state. Mr. Ambode informed the MIT team that his government will create opportunities to set technology hubs in Lagos state for business development.Governor Ambode along with his team met some key personalities of MIT such as MIT Africa MD, Julia Reynolds-Cuellar and the Director MIT Regional Entrepreneurship and Acceleration Program (REAP) Team on Africa, Sarah-Jane Maxted. In this important meeting, Governor Ambode insisted on the possibilities to use the technological expertise of MIT for future progress of the state. In return the MIT officials warmly welcome the move and promised to provide full support to develop Lagos state.

Mr. Ambode also interacted and held important discussions with Nigerian students of MIT, on this visit. After watching the presentations, on different developmental tasks, given by Nigerian MIT students, the governor expressed his full interest to support young entrepreneurs with Lagos State Employment Trust Fund (LSETF).

Mr. Akinwunmi Ambode has a great role in the development of Lagos state, since he was elected as Governor in 2015. Before becoming governor, Mr. Ambode was a financial consultant, as he holds a degree of chartered accountancy. Mr. Ambode was born in 1963, in Epe Lagos and has earned his accounting degree from university of Lagos.  Mr. Ambode has earned many key awards like US Fulbright Scholarship for the Hubert Humphrey Fellowship Programme in Boston Massachusetts.He has also studied from Wharton Business School, for Advanced Management Programme.

Filed under: News, Politics
Share Tweet Pin G Plus Email
previous article: What Are The Different Types Of Website Hosting Plans?
next article: 5 Wine & Spirits Gifts Suited for Any Season