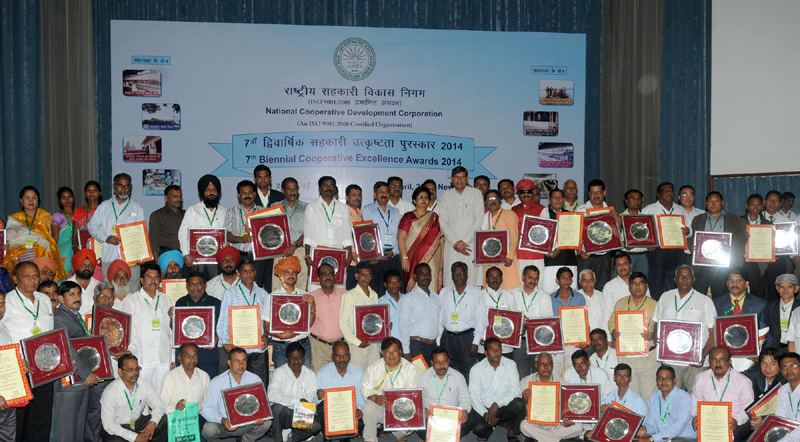 The Minister of State for Agriculture, Mr. Mohanbhai Kalyanjibhai Kundariya with the winners of the National Cooperative Development Corporation (NCDC) 7th Biennial Awards for Cooperative Excellence, at a function, in New Delhi on April 29, 2015.

New Delhi (PIB-GR-TYP-BIN): Union Agriculture Minister Mr. Radha Mohan Singh, underlined the important role of ‘eMarketing’ and the infrastructure development for Agriculture ‘eMandis’. He urged States to think about the unified agriculture market for the states so that farmers can sell their agriculture produce at single place. This will also enable the concept of National Unified Agriculture Market to be successful. He said that ‘eMandis’ would require a software where farmers could enter the data related to agriculture produce. He emphasized this during the in-session meeting of the consultative committee of Ministry of Agriculture in New Delhi on April 30.

Chairing the meeting of the consultative committee of Parliamentarians of the Ministry of Agriculture, the Minister informed that the eMarketing will help to bring one Market concept and farmers would need to be educated about this concept. He said that agri-market will promote direct linkage between the farmer and the consumer, without the need for intermediaries and enable effective consumer information dissemination.

Participating in the discussion, MP Mr. Shankarbhai N. Vegad suggested to create awareness among farmers regarding ‘eMandis’. MP, Mr. Manshankar Ninama suggested about creating awareness about the role of ‘eMandis’ and the States responsibility.