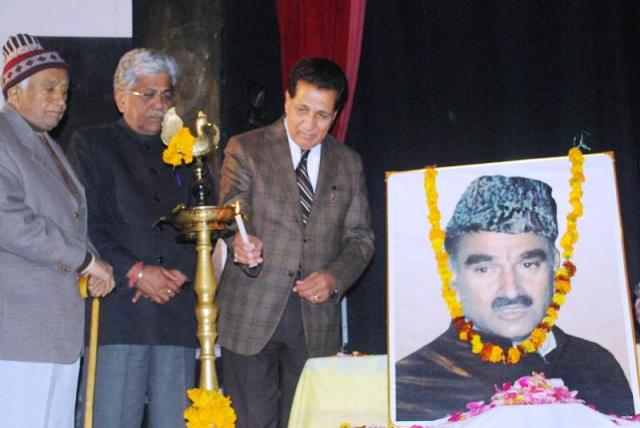 RS Chib who was the Chief Guest on the occasion of 21st martyrdom anniversary of Pandit Prem Nath Bhat paying tributes to Late Prem Nath Bhat described him as a true secularist, who practiced human love, kindness and communal brotherhood in his day to day life.

He said that the present Coalition Govt. was fully aware of and concerned with the problems being faced by the Kashmiri migrants in their exile. Various steps have been taken to mitigate their sufferings, while more steps will be taken in due course of time.

On this occasion G Vasudev, Secy. National Resources Development Vivekananda Kendra KanyaKumari, who has specially come to Jammu to participate in the memorial service for late Prem Nath Bhat and other martyrs during the militancy in J&K, who presided over the programme called Pandit Prem Nath a spiritualist in his day to day life, following the teachings of Swami Vivekanand. Sh. Vasudev recalled Pandit Prem Nath Bhat’s services to the Vivekanand Kendra Nagdandi Anantnag, of which he was a pillar.

Two martyrs, namely Ashok Qazi and Sushil Bhat were honored posthumously on the occasion and their family members were given away shawls, certificates of honor and a token cash relief by the Chief guest RS Chib on behalf of the Prem  Nath Bhat Memorial Trust.

Earlier highlighting the sufferings being undergone and problems being faced by the migrant Community Dr. MK Bharat drew attention towards blatant human rights violation of Kashmir Pandit Community and other migrants, whose future is in doll drums during last 21 years in exile. He said that while wolf cry is being raised over human rights violation at the hands of security forces, of the Kashmiris present in the valley, nobody talks about human rights violations of the community which is haunded out of their homes and hearths for last over twenty years, with hardly any hope of their return to native places.

Mr. Bharat, dwelling on the government announcement of employment package for display Kashmiri youth,said the linking of the employment with the return of Kashmiri Pandits to the valley defeats its very purpose, since govt. has failed to create conditions conducive for the honorable and dignified return of the migrants to the valley and their permanent settlement there , without any threat to their security, involving need for another exodus. He also drew attention towards encroachments of religious places and shrines of Hindus in and reiterated the demand of the community for early passage of the bill to check this trend. He also complained that the Act passed in the past prohibiting distress sale of Kashmiri Migrants property in the valley is not being implemented in practice.

Advocate BS Slathia, President Bar Association Jammu who was the Guest of Honor also paid tribute to late Prem Nath Bhat and other matyrs at the hands of  anti national religious fanatics in J&K during last 21 years.

Dr. Arjun Nath Pandita chairman of the Trust welcoming the distinguished guests and invitees to the programme explained the significance of observing the day as an annual feature.