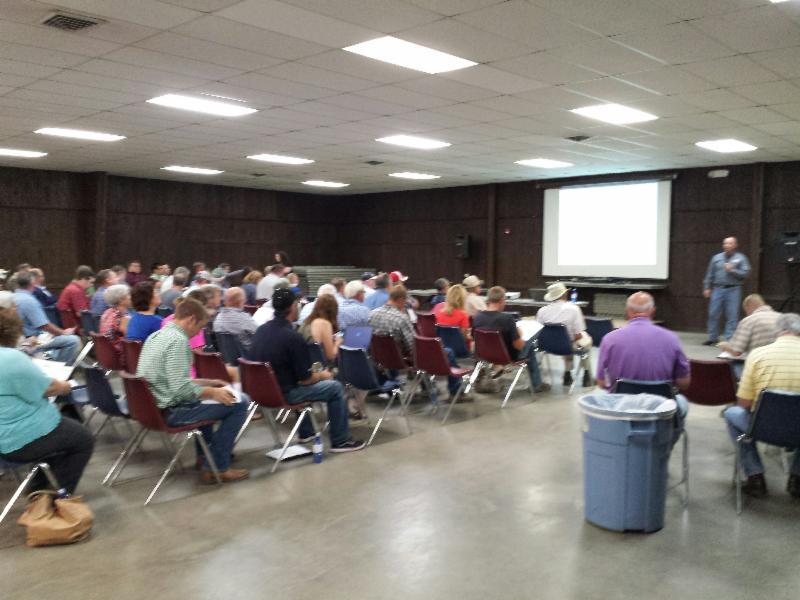 Pictured are some of the concerned citizens of Western Kansas at the water conference in Garden City. “Water and the Kansas economy are directly linked. Water is a finite resource and without further planning and action we will no longer be able to meet our state’s current needs, let alone growth.” –Governor Sam Brownback. If you would like to read the document and give feedback to this important issue go to: kwo-info@kwo.ks.gov. Kansas Rep. Ryckman attended the meetings in Liberal and Garden City and the Ogallala Aquifer is declining faster than it is recharging. At the current rate, with no changes in the next 50 years, the Ogallala will be 70 % depleted and our reservoirs will be 40% filled with sediment.

Ryckman’s Recaps
Recaps 14(2014)
Since the Legislature has been out I have been visiting with and helping constituents in the 115th, answering e-mails and phone calls and attending meetings. Now is harvest time in SW Kansas and famers are busy in the fields hoping to receive fruits for their labors. We did welcome some rain but I fear it is a little late for the wheat crop.
Education lawsuit
A panel of three district court judges on June 11th approved the state’s education plan passed this session by the legislature. The ruling takes off the table the possibility of the courts striking down the state’s Local Option Budget revenue stream for local schools. The Supreme Court in its Gannon v. State decision had identified an equity problem with the funding of the education finance formula. The court held that poorer districts were not being equalized properly for the wealth disparity between districts.

In order to fix the inequity, the legislature increased funding into the formula by $135 million. The district court panel ruled the state had satisfied the equity aspect of the Supreme Court’s decision but held the case open for further monitoring.

The Kansas Water Office in conjunction with the Kansas Department of Agriculture is holding the Kansas Water Vision Statewide Public Input Tour the week of July 7-11. The tour is the latest phase in developing the Vision for the Future of Water in Kansas plan. Last October, at the Governor’s Water Conference, Governor Brownback called on his administration to develop a 50 year plan for the future of water use in Kansas. As the Governor stated at the October conference, if no action is taken in the next 50 years, the Ogallala Aquifer will be 70 percent depleted. Also, the water reservoirs in eastern Kansas will be 40 percent filled with sediment and five of the seven major river basins in which reservoirs support the municipal and industrial use won’t be able to meet demands during a drought. The remaining date  and location for the public tour is:

The Visioning Team, which consists of officials from the water officeand KDA, will begin drafting the final plan based on feedback from stakeholders, agency coordination and Governor’s Council of Economic Advisors. They will provide public updates during the August 2014 KWA meeting. By early October 2014, the Visioning Team will complete a final draft of the Vision for the Future of Water in Kansas. The Visioning Team will present a summary of the plan at the Governor’s Conference on the Future of Water in Kansas in October 2014. For information on the plan and the process visit the Kansas Water Office website at:http://www.kwo.org/50_Year_Vision/50_Year_Vi

The best legislation involves a collaborative effort between the people and their representatives. I encourage you to let me know your thoughts on the issues discussed by the legislature and others which might be affecting you. Please feel free to call (620.873.5273) or e-mail (ronald.ryckman@house.ks.gov ) and I’d be happy to discuss any topic you are interested in. Thank you for the honor of serving you!