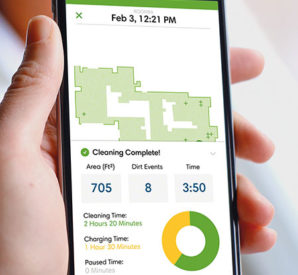 Roomba owners woke up to a new app update this week. The update provides integration with Amazon’s Alexa and advances cleaning with detailed cleaning maps. The company, iRobot, introduced detailed maps of the user’s homes to view where the Roomba cleaned and which areas in the home were dirtiest.

The vacuum will note the dirty areas in the home with a plus sign and spend more time cleaning the area.

Owners of the Roomba will also receive a text to be alerted when their vacuum is done cleaning the home. The app is available for iOS and Android. Users hoping to use the Alexa integration will need to wait until the official launch sometime in Spring.

Alexa integration allows the user to tell their Roomba to start cleaning right through their Alexa voice command. Sparse details are provided on the integration depth of the two products. Owners of the 900 series are the only users that the update is available to at this time.

The 900 series is the company’s premiere lineup of robotic vacuums.

iRobot offers a lineup of robot vacuums, robots maps, gutter cleaners and robotic pool cleaners. The company aims to integrate their Roomba lineup into the connected home spectrum. Clean maps and Alexa integration helped the company’s stock jump 2.46% on Wednesday on the news.

Dyson, the maker of high-end vacuums, is working to enhance their offering with a hefty investment in artificial intelligence. The company’s 360 Eye robot vacuum is nearly triple the price of Roomba, yet it’s dubbed as a superior product.

The company plans to spend £330 million in research and development in its Singapore facility.

The company also announced an initiative to expand its workforce to 7,000 people over the next five years. The expansion in workforce is a direct result of the company opening a new UK campus. News broke of the new campus on March 1.

The campus will be on a 517-acre site in Hullavington. Sir James Dyson stated, “After 25 years of UK growth, and continuing expansion globally, we are fast outgrowing our Malmesbury Campus.” The new campus will be an old Ministry of Defense site.

Dyson states that the new facility will allow the company to create jobs in Cotswold and continue to create world-class products.

The vacuum giant spends £7 million a week in research and development and has pledged to invest £2.5 billion in future technologies. Analysts suggest that robotics will be the company’s main driver of research, with a focus on connected homes.

The company planned a £250 million expansion at their Malmesbury facility in 2014.

Forecasts suggest that the robotic vacuum industry will grow from $981 million in 2013 to $2.6 billion by 2020. The report was released by ReportsnReports.com.

Industrial logistics robots are expected to reach $31.3 billion in value by 2020.