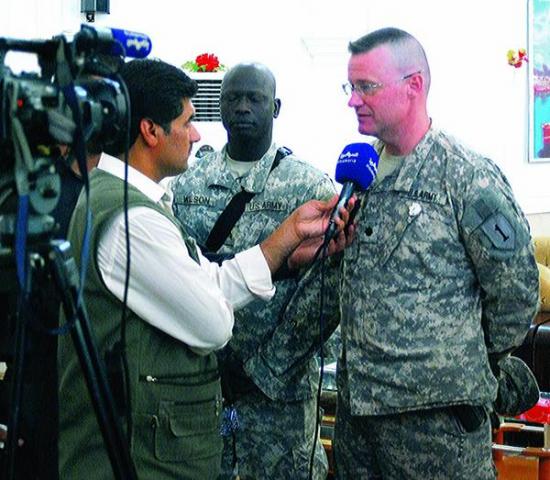 I promptly went back and looked at the more than 50 comments I received on the ROTC censorship article and considered what I had previously read  and wrote about on WikiLeaks. I then compiled five questions.

1)      Professor Zunes of the University of San Francisco writes in the Mercury News article dated 1/24/10: “According to a Dec. 8 memo from Col. Charles M. Evans, commanding officer of the 8th Brigade, U.S. Army Cadet Command, "using the classified information found on WikiLeaks for research papers, presentations, etc. is prohibited." A follow-up memo from the cadet commander at the University of San Francisco advised against even talking about it, precluding ROTC students from taking part in classroom discussions regarding WikiLeaks material.”

Professor Zunes has informed me that since publishing his editorial, he has received clarification from cadets and the ROTC. Essentially, Professor Zunes says that the U.S. Army Cadet Command has sought a more “liberal” interpretation of the policy.

Lt. Colonel,  Can you provide students and cadets with a better understanding of the policies regarding WikiLeaks?

2)      Can you explain to students and cadets the difference between accessing information from what the military has called a “direct source” like WikiLeaks and that of a “secondary source” like the New York Times? In other words, why does the military prohibit one source and not the other?

3)      I have read dozens of comments like this one from Adam Russell in the Mercury News, “The government is more concerned that the American people not see what is in wikileaks than that foreign governments might read it.” There has been widespread concern about “government censorship.” Can you please address these concerns?

4)      Slan writes at the Daily Kos, “Once it is in the public domain then the declassifying authorities are supposed to expedite review, and downgrade the classification. Many things are classified for tactical reasons, and once the time element has passed, there is no need to maintain security classification. For instance, the timing of bombing runs is a secret, right up to the point where the bomb drops and explodes. Upon impact, the bomb becomes public knowledge, ie everybody knows about it, especially KIA, WIA, collateral damage, and EMS and hospital personnel who have to clean up the mess.”

Can you help people understand the process of classification and why most of the WikiLeaks information, that has been out in the public domain for some time now, is still considered classified?

5)      Some have claimed that punishing cadets for writing about or researching websites like WikiLeaks is unconstitutional. One commenter points out,

“(footnote 84 pg 15 CRS doc) —
. . .  the Court has stated that "state action to punish the publication of truthful information seldom can satisfy constitutional standards."Stone expands on this –" . . . a central principle of the First Amendment is that the suppression of public speech must be the government’s last rather than its first resort in addressing a potential problem. If there are other means by which government can prevent or reduce the danger, it must exhaust those other means before it can suppress the freedom of speech. This, too, is an essential premise of the clear and present danger standard. In the secrecy situation, the most obvious way for  government to prevent the danger is by ensuring that seriously damaging information  is not leaked in the first place. Indeed, the Supreme Court made this point quite clearly in its 2001 decision in  Bartnicki v. Vopper, . . . As the Court explained, when an individual receives information "from a source who has obtained it unlawfully," an individual may not be punished for publicly disseminating even information relevant to public discourse, "absent a need of the highest order." . . . "it would be quite remarkable to hold" that an individual can constitutionally can be punished merely for disseminating information because the government failed to "deter conduct by a non-law-abiding third party."

Does the U.S. Army Cadet Command believe the WikiLeaks website meets the constitutional standard of “highest order” and “clear and present danger”?

Realizing my questions were broad sweeping, yet bound to be asked by many college journalists, political science, and foreign policy students (like myself) this semester, Lieutenant Colonel Hackathorn was gracious enough to respond to at least the first question. Here is his response in full:

I’d like to clarify from our phone conversation the guidance Cadet Command sent out to our Brigades and Professors of Military Science. This guidance should answer your question #1:

ROTC students may participate in classroom discussions related to issues where classified information is accessed via Wikileaks, or from publications that reference information from Wikileaks.

Cadets/Cadre direct research or access to Wikileaks is not recommended. Research for classified information in the public domain is prohibited on unclassified government computers. Student access to such information using school computers, personal computers, smart phones, iPads, etc.,) is not prohibited, only discouraged.

Cadets are not Soldiers and this guidance serves as a recommendation to safeguard the future of newly commissioned officers seeking security clearances.

Dean, the remaining questions in your email are much better suited at the Department of Defense level. In other words, you’re asking about censorship, constitutionality, the classification process, etc., and these questions are far beyond the boundaries of USACC. DOD PAO is the appropriate entity to obtain those answers.

I’ve forwarded those questions thru my higher headquarters and up to DOD for response. I hope you receive answers very soon.
v/r
Matt

“ROTC students may participate in classroom discussions related to issues where classified information is accessed via Wikileaks, or from publications that reference information from Wikileaks.

Cadets/Cadre direct research or access to Wikileaks is not recommended. Research for classified information in the public domain is prohibited on unclassified government computers. Student access to such information using school computers, personal computers, smart phones, iPads, etc.,) is not prohibited, only discouraged.”

As far as I can tell, the essential message coming from the US government is to tell students that they can talk about WikiLeaks, but should not visit the site. Visiting the site “is not prohibited, only discouraged.” Which is essentially is like saying you should not go to the site for fear of retribution, for behaving in discouraged conduct.

LTC. Hackathorn suggested to me that WikiLeaks was a “direct source” while the New York Times was a “secondary source.” I thought Private Bradley Manning was considered the primary source of the leak? How Wikileaks became lumped together as a “direct source” under government think is beyond me.

Nonetheless, LTC. Hackathorn is correct. These questions go beyond the concerns of future cadets. The fact is, the questions raised by the WikiLeaks documents opens the flood gates to widespread controversies and accusations of government censorship and suppression of democracy that goes even beyond the military, the State Department, and the Department of Homeland Security. The remaining questions ultimately fall on the laps of the Department of Justice and the Commander and Chief. And I’m certainly not expecting to hear from them any time soon. Nonetheless, I’d love to hear from the DOD and DOJ. Feel free to call or email me. Certainly, I will continue to pursue this issue.

Yesterday, WikiLeaks was nominated for the Nobel Peace Prize. Some Americans certainly will find it a little odd that the government continues to prohibit or discourage potential officers from visiting a website nominated for the Nobel Peace Prize. Recently, several scholars have cited WikiLeaks for helping to topple Tunisia and credit if for some of what is now happening in Egypt.

I’m a student writer. I’m not a lawyer or an expert on government censorship. It appears there are a lot of unanswered questions that still need to be answered by lawyers and scholars regarding the whole classification process, censorship, and the constitutionality of discouraging and  prohibiting government employees and future candidates from visiting WikiLeaks and other whistle blowing sites. I’m simply asking the questions and following the leads.

Here is some further guidance from the military regarding WikiLeaks