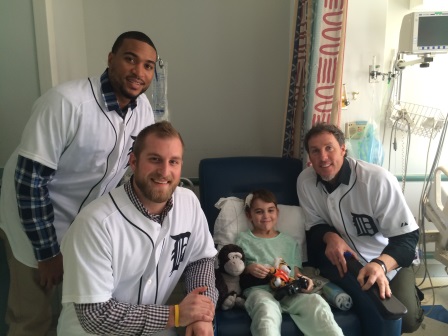 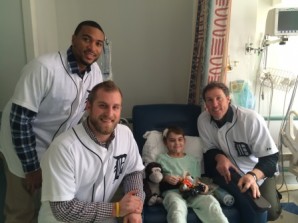 When Erik and Heather Poyhonen’s 6-year-old son Oliver was not gaining weight and vomiting several times per week in the fall of 2014, they took Oliver to his local pediatrician. After tests did not pinpoint the problem, they requested a referral to a local gastrointestinal expert. The gastroenterologist performed several tests that came back normal, so he ordered an MRI on Oliver to rule out any potential serious issues.

“I was at work when my cell phone rang and the doctor told me he found a large mass in Oliver’s brain and I needed to head to the doctor’s office immediately,” Heather says.

She then had to make the hardest call she had ever made to her husband Erik to let him know about Oliver, a sweet-natured boy who is the most loved kid you’ll ever meet, according to his mom.

Heather said it was heartbreaking for Erik and her to have to explain to Oliver what was going on. He asked them if he was going to die.

After consulting with Oliver’s local pediatrician, Heather and Erik decided to seek treatment at the Children’s Hospital of Michigan, part of the Detroit Medical Center.

“We trust our pediatrician, and she strongly suggested Children’s Hospital of Michigan is where we should take Oliver,” Heather says.

Without hesitation, they took Oliver to the Children’s Hospital of Michigan and were promptly seen by Abilash Haridas, M.D., a pediatric neurosurgeon on staff.

“As soon as we met Dr. Haridas, we knew he was our superhero. He immediately connected with Oliver and despite the serious situation, we felt very confident of his abilities,” Heather says.

An MRI confirmed that Oliver had a large mass in his brain, but Dr. Haridas told the family he felt confident that the tumor was not malignant and that it was probably a rare benign tumor called choroid plexus papilloma.

During the 9-hour surgical procedure in January of 2015, Erik and Heather’s family and their family pastor anxiously awaited the results. The family received a phone call every hour during the procedure, and the family was relieved to hear the procedure was going well.

“Dr. Haridas came out after the procedure and with a smile said, ‘I have good news. I am confident I got it all.’,” Heather says. She immediately gave him a big hug.

“When you are surgically removing something in the brain, there are so many things that can go wrong. Words cannot describe the feeling we had when Oliver came out of surgery and wanted to see his mom and dad.”

More good news soon came when the pathology report confirmed the tumor was choroid plexus papilloma and the chances of it returning are rare.

“Not only did Oliver have a large brain tumor, he also had hydrocephalus, where the normal brain fluid pathway is blocked, causing severe pressure in the head. Something like this is life threatening, if not caught in time,” Dr. Haridas says. “Luckily for Oliver, his tumor was benign and completely removed with no complications. Oliver’s strength and poise throughout this ordeal is nothing short of inspiring. It’s what keeps me motivated as a doctor.”

Oliver received a stuffed gorilla as a gift from Heather’s best friend so that Oliver could cuddle with it, and the family nicknamed him Harry for Dr. Haridas as a reminder of their superhero.

“I cannot begin to thank the staff, including anesthesiology, the nurses, Child Life, and the doctors and surgeons. They all knew Oliver and cared for him deeply,” Heather says.

When Dr. Haridas first met with the family he emphasized not to look back but to look forward. Oliver is enjoying playing video games, participating in the Chess Club and looks forward to one day being a scientist.