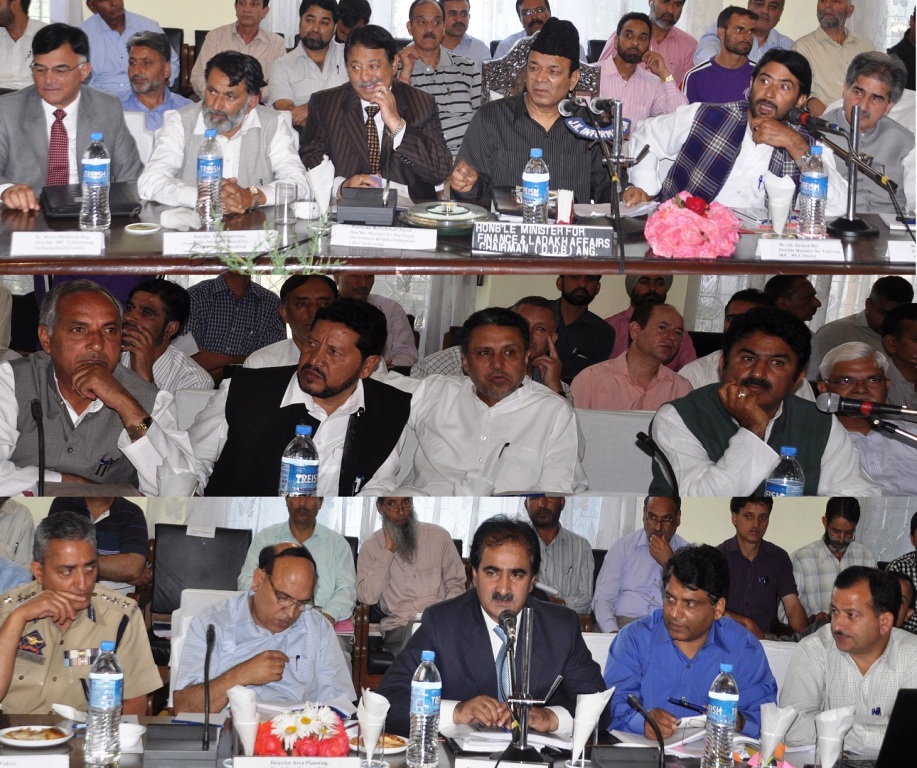 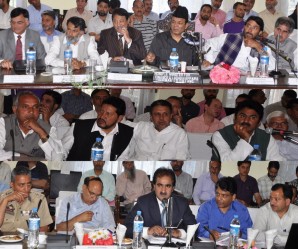 Anantnag/Srinagar, June 22(Scoop News)-In addition to other issues of prime public importance, the matter regarding speedy release of land compensation cases under PMGSY in various parts of the state will also be taken up with the Prime Minister of India, Dr. Manmohan Singh during his forthcoming visit to J&K, scheduled on 25th of this month. Enhancement of allocations under RKVY for setting up of income generating units under sheep, animal husbandry and floriculture would also be taken up with the Prime Minister.
This was stated by the Minister for Finance and Ladakh Affairs, Abdul Rahim Rather, who is also the Chairman of the District Development Board Anantnag while chairing the Board meeting held here today to finalize the current year’s annual plan.
The Deputy Speaker, Jammu and Kashmir Legislative Assembly, Sartaj Madni, the Minister for Haj and Auquaf, Peerzada Mohammad Syeed, Minister for Tourism, G. A. Mir, Vice Chairman, Pahari Advisory Board, Kafil-ur-Rehman, Member Parliament, Dr. Mehboob Beig, legislators, A. R. Veeri, Abdul Gaffar Sofi, Rafi Ahmad Mir, Peerzada Mansoor Hussain, G. N. Monga, Dr. B. A. Veeri, Abdul Majid Bhat, District Development Commissioner, Anantnag, Dr. Farooq Ahmad Lone and heads of various civil and engineering departments also attended the meeting.
The meeting took a detailed review of physical and financial achievements of the last year’s plan out lay and also discussed targets for the current financial year. After thorough discussions, the Board approved current year’s plan out lay for the district Anantnag to the tune of Rs. 110.80 crore which includes Rs. 75.37 crore as capital component and Rs. 35.43 crore as revenue component. It was informed that 97% of the previous year’s plan out lay, which was almost the same, has been expended on various schemes.
Speaking on the occasion, Rather asked the executing agencies and departments to give further push forward to the development works and welfare schemes adding that “we should avail maximum possible benefits of the unprecedented flow of funds for various flagship central schemes. This golden opportunity needs to be fructified into a sustained socio-economic transformation by putting our heads together”, Rather added.
While expressing dismay over slow pace of work on Anantnag-Simthan-Kishtwar road, Rather asked the BEACON authorities to expedite work on this important alternate highway. He also asked the PHE department to make all the 68 water filtration plants in the district functional so that people can get clean drinking water. It was further informed that water meters will be installed in the entire commercial establishments in the state. So far 200 water meters have already been installed in various commercial establishments in Kashmir division. He directed the Municipal Corporation, Anantnag to immediately take up maintenance and up keep of all the street lights in the Anantnag town. Rather asked the members of the Board to preferably identify need based works for inclusion in the annual plan which shall be fulfilling the urges and aspirations of the common people. The rehabilitation of khokhawalas at Kokernag also came up for threadbare discussion. It was decided in the meeting that the fruit mandi Bantengo will be made functional by 15th of July this year. The Legislators in one voice demanded to enhance the allocation for purchase of power sprayer’s poly-green houses, pack houses. It was decided in the meeting that an amount of Rs. 5 crore will be provided to make Phase I of the 300 bedded hospital Anantnag functional by the end of August this year. It was informed that sports stadium Anantnag will be expectedly completed by ending Feb 2014. Physical and financial achievements regarding construction of other playing fields in various parts of the district were also reviewed also threadbare.
The district development commissioner Farooq Ahmad Lone, besides presenting the details about physical and financial achievements registered during last fiscal also highlighted some major ongoing projects of public importance that need special funding under State plan for completion. These includes solid waste management of municipal areas and sewerage treatment of major towns, shifting of Achabal bus stand Anantnag to outskirts of the town, funding for parking place near stadium Anantnag, Macadamization of general bus stand, construction of circular road from Sarnal to Sarnal chowk to Mir bazar, construction of Achabal, Chattapal road and Thajiwara-Sursuma-Khandura-Shangus road, Trauma hospital Bijbehara, completion of Anantnag water supply scheme and improvement of LT and HD lines in various parts of the district.
In response, Rather assured that all these issues will be taken up with the higher authorities for consideration and approval.
The Minister for Tourism, Ghulam Ahmad Mir while responding to an issue raised by Mohammad Rafi Mir said that construction of historic Pahalgam club will be completed and commissioned by the end of current year. He said Chief Minister has agreed to provide a special grant of Rs. 4 crore for this purpose.