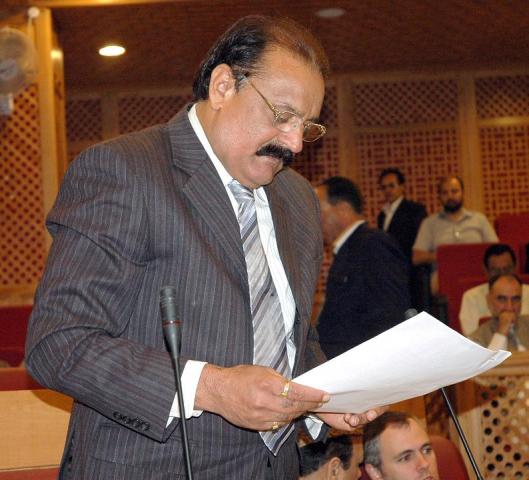 , October 01 (Scoop News) –  The value of the cross LoC trade between Salamabad, Uri and Muzaffarabad during the last financial has been to the tune of over Rs 164 crore. This includes exports from worth Rs 71.80 crore and import from PoK worth Rs 92.41.

This was stated by the Minister for Industries and Commerce  S. S. Slathia in reply to a question of  M. Y. Taing. He said the value of Rs. 192 crore which includes over Rs 70.73 crore worth export to PoK and Import from PoK worth Rs 121.83 crore. He said opening of more trading routes is a matter between and . He said so far 2944 passengers from the State have travelled across the line of control via Muzaffarabad, Uri, Poonch, Bagh and other routes.

Replying to the supplementaries by Jahangir Mir, Mohammad Rasheed Qureshi,  Javid Rana and  Abdul Gani Vikal ,the Minister said that  the State has been recommended some new routes Tatapani –Balnoi,R.S.Pora-Sailkote.He further said that five telephone booths each with ISD facilities have been installed in Poonch and Uri to facilitate traders.The State Government has already conveyed its desire to the Government of India to have more such trading points opened in the State.He further said that Rs.40 crores has been sanctioned for building infrastructure at Poonch and Uri, adding that Rs.4.82 crore has already been spent out of Rs. Crores in Poonch.

Government has taken several measures for preservation of forests of region and safeguarding flora and fauna.

This was stated by the Minister for Forests, Mian Altaf in reply to a question of  Naresh Kumar Gutpta in Legislative Council today.

Elaborating, the Minister said that the department has already laid due focus on protection and preservation of Forests of Chenab region. Six territorial divisions headed by the Divisional Forest Officers are working in Marwah, Kishtwar, Doda Bhaderwah, Ramban and Batote area. Conservator of Forests, circle who is the controlling officer for these divisions is headquartered at Doda. Besides this, Forest Protection Force, Gama units are functioning at Doda, Kishtwar and Batote. Also, there are two Social Forestry Divisions headquartered one each at Doda and Ramban.

Mian Altaf said that Soil Conservation Department has also its District Offices at each district, i.e. Doda, Ramban and Kishtwar. Moreover there are three project officers working for treatment of catchment areas of . These project officers are stationed at Doda, Batote and Buddhal. Project Coordinator of this special project is stationed at Batote. The Wildlife Protection Department has the office of Wildlife Warden at Kishtwar which looks after the National Park Kishtwar. Thus Department has already adequate presence of different wings to ensure preservation and development of forests of region.

The Minister said that controlling forest fires will be done under  CAMPA schemes. He said the Government has taken measures to fill up all the vacancies to improve the functioning of the department.

As regards shifting of sub-officers of Chief Conservator of Forests (territorial), the Minister said office of the Conservator of Forests, Chenab Circle, Jammu stands already shifted from Jammu to Doda by the government and is headquartered at Doda with a view to closely supervise and administer the forest management and other related developmental works. There is no further plan to shift/establish the sub-offices of Regional Director, Social Forestry. Director Soil Conservation office, Doda and two full-fledged divisions of Social forestry Department functioning in at Doda and Ramban.

Fisheries Department has spent Rs 3.29 lakh for up-gradation of water harvesting tank, which is also being used for fish stocking in Achan village in Pulwama district.

This was stated by the Minister of State for Fisheries,  Aijaz Ahmad Khan in reply to a question  B. A. Magray in Legislative Council today. He said Rs 47 lakh have been spent on fish, adding that 8 lakh kgs of fish have been sold through auction.

The Minister of State for PHE, Nasir Aslam Wani today informed the  House today that  there are  on-going 25 water supply schemes in Poonch, which  include13 WSS schemes  in Mendhar.He said that 17 WSS are scheduled to be completed soon.

This was stated by the Minister in reply to a question by  Rashid Qureshi in Legislative Council today.

The Minister said that the funds under the District Sector are allocated on the basis of Plan ceilings conveyed by the Planning and Development Department after discussions with the Public representatives in the District Development Board meetings and consultation with the HoDs, sectoral officers etc. Similarly, under the state sector schemes, funds are allocated as per the approved annual plans on yearly basis.The requirements of Districts are also addressed as per availability of funds over the year.

He said appropriate action shall be initiated as per decisions taken in the District Development Board meeting for which procedural requirements need to be completed first.