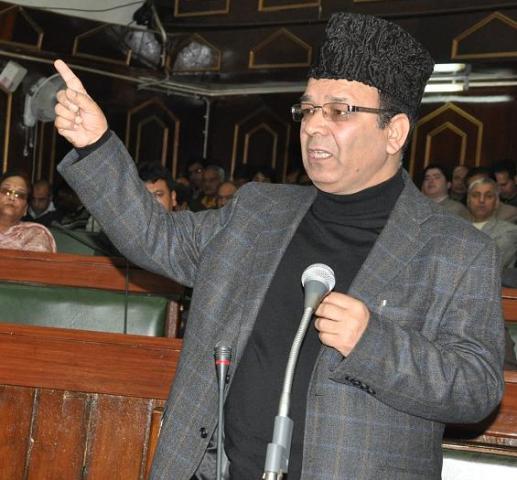 , March 15 (Scoop News) – Minister for Finance and Planning,  A.R. Rather has said that Government has earned revenue to the tune of Rs 397.55 crore during last two fiscals through Lakhanpur Toll Post, of which Rs 208.92 crore was collected during last financial year.

This was stated by the Minister in reply to a question by  Ajaz Ahmad Jan in the Legislative Assembly here today.

The Minister said that construction work of new Toll Plaza Lakhanpur is apace. He said the complex is consisting main office block, recreation building, Animal Husbandry building, driver shelter shed, dhabas, toilet block, parking space  and  nine weigh bridges. He said that the construction work of the complex is strictly monitoring and would be completed within two to three months.

The Minister said that Government is vigorously perusing the matter for early completion of new import bridge and bye-pass road with National Authority of India.

The Minister also gave detailed information about the postings of the officials posted at Lakhanpur Toll Post during last five years. He said that no officer or official are being posted more than two years there.

Minister for Finance and Planning,  A.R. Rather has said that under Prime Minister’s Reconstruction Programme an amount of Rs 9904.19 crore have been expended for upgradation of infrastructure under various sectors upto January 2011 in the State, of which Rs 3925.75 crore have been expended on the execution of the projects implemented by State Government and Rs 4641.13 crore utilized on the projects implemented through Central executing agencies in the State.

This was stated by the Minister in reply to a question by  Harshdev Singh in the Legislative Assembly here today.

The Minister said that it is a fact that the cost of Prime Minister’s reconstruction Programme is revised with inclusion of some new works viz a viz revision in cost due the escalation and change in scope of works. He said the implementation period for execution of the projects in the State under the programme has been extended upto the end of 11th Five year Plan.

Rather said that during last two years some important development schemes have been announced by the centre, adding that two central Universities have been approved for the State. He said for the purpose 1650 kanals of land have been acquired for Kashmir central University and 3000 kanals for so far. He said 18 new Polytechnic sanctioned by the Centre for uncovered blocks of the State, adding that process of land acquisition for setting up of these institutions is a final stages. He said separate project implementation unit has been constituted to monitor the implementation of these projects. He said under Re-Structured Accelerated Power Development Reform Grant, 30 towns in the State have been sanctioned.

The Minister said under 8-point package the Central Government has released Rs 100 crore for improvement and addition to the existing infrastructure in schools and colleges. He said under special task force recommendations no funds have been released so far although Rs 100 crore for Ladakh and Rs 150 crore for Jammu have been earmarked by the Centre for 2011-12.